When looking back into the many trips that I made for my book, I think that as a whole, it was a once-in-a-lifetime opportunity. I visited more than 80 locations in three years. Nearly two dozens of them were just concrete-and-steel metropolitans like Pontianak, Surabaya, Kupang, Jayapura or Manado. But the journey also brought me to visit 40 small towns, 14 villages, 11 isles and two peculiar beaches. Names such as Karatung, Karakelang, Binongko, Tomea and Mansinam, for instance, barely ring a bell among most people living in Java.

I also climbed Mt. Kelimutu on Flores Island, seeing sunrise near its breathtaking three-color volcanoes: red, green and dark brown. Unfortunately, when driving down from the feet of the mountain, a car hit my motorbike at a road curve. The motorcycle driver, a teenager from Ende, suffered a bone fracture. A passing car brought him to Ende while I walked his wrecked motorcycle for nearly an hour. 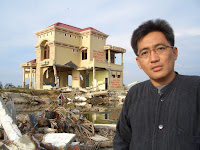 In Aceh, I hopped into a chopper when visiting the tsunami-ravaged coastal town Lamno. In western Kalimantan, I took public buses. In Java, I easily used trains and planes. Seasick is not my problem. But small cockroaches that inhabited my Manado-Miangas ship cabin obviously posed a problem. I once took a small wooden boat to visit the unpopulated Ndana Island. The waves were pretty rough. The boat almost capsized when its fisherman suddenly jumping into the sea to catch a pair of mating giant sea turtles. It was the first time ever I saw sea turtles making love. He caught only the female one.

My son, Norman, also accompanied me during his school holidays. He was only six years old when his father began the journey. Three years on, he turned into a healthy fifth grader, fond of snorkeling, daring to jump into the deep sea from our ship. Norman also collected several exciting sea shells. Papua is his favorite destination. He loves Papua’s pristine rainforest. “It’s good for my health,” he said, referring to his asthma.

Once my father joined his son and his grandson, visiting a Dutch-inherited plantation in Kalibaru, near my hometown Jember in eastern Java. In the farm, Norman saw workers milking the cows and processing rubber milk. In another summer afternoon, Norman played with children on the remote Tomea Island. The children don’t speak Malay. Norman obviously doesn’t speak the Tomean language. But children speak a universal language: soccer. He was the goalkeeper and lost the game! We then tasted barbequed sea urchin (bulu babi).

I disciplined myself to read relevant documents and books prior to each trip. In Aceh, I stayed mostly in Banda Aceh’s Hotel Sulthan, reading Hasan di Tiro’s analysis of Indonesia, but also traveled to the Aceh guerilla-controlled areas like Tiro, Sakti, Sigli and Lhok Nga. I crossed the Banda Aceh strait to do some interviews in Sabang and visited Iboih Beach, Balohan seaport and the Ujong Batu tip on Weh Island. Ujong Batu is the site of the "Republic Indonesia Kilometer Zero" monument.

In Borneo, I didn't cross any sea –it is already one of the largest islands on Earth-- but used dongdong motorboats to travel in swampy areas. It was one of the most grueling trips I have ever had. I visited killing fields of the Madurese settlers scattered in the Sambas vicinity. In western Kalimantan, my visitations included Pontianak, Tebang Kacang, Singkawang, Roban, Selakau, Pemangkat, Tebas, Jawai, Sentebang, Sambas, Semalantan, Bengkayang, Sanggau-Ledo, Menjalin and Mempawah. I spent a New Year's Eve in Singkawang, alone in Hotel Kathulistiwa.

In Sulawesi, I began my trip in Makassar and Manado. Makassar was only a brief stop to do some interviews on Bugis Muslim fighter Kahar Muzakkar. From Makassar, I flew to Manado, the metropolitan in northern Sulawesi, to interview Minahasan activists. I then took a car from Manado to visit Minahasa’s intellectual capital: Tomohon. Later I used speedboats and ferries to travel around Sangihe and Talaud islands. They included Tahuna (Sangihe Island), Lirung (Salibabu Island), Melonguane and Beo (Karakelang Island), Karatung Island and Miangas Island. In the 1940s and 1950s, Eastern Indonesia (Borneo, Sulawesi, the Malukus and the Lesser Sunda) was heavily involved in promoting federalism in Indonesia. They were opposed by Java-based poticians, who feared that such a state will be used by the colonial Dutch's divide and rule strategy.

In June 2006, from Kendari in southeast Sulawesi, I boarded a ferry to go to Baubau and to drive across the Buton Island to reach Pasarwajo. In Pasarwajo, the site of the Butonese sultanate, Norman and I boarded a Bugis ship, phinisi, to roam around Wangiwangi, Kaledupa, Tomea, Binongko and Hoga islands. This archipelago, located in the biodiverse hotspot known as Wallacea, was made an environment protection area. It is also a diving paradise.

In Java, I traveled to Semarang and Salatiga, where I used to live. Later I visited Blitar (the tomb of Sukarno), Panataran village (the site of the Palah Temple of the Majapahit era), Malang, Surabaya, Pasuruan, Probolinggo and my hometown Jember. Along with his grandfather and father, Norman came to see plantation areas like Glenmore, Kalibaru and visited a turtle-breeding beach called Sukamade. My father accompanied Norman when I did my interviews. I lost my laptop and my camera inside the Jakarta-Blitar train. Thieves probably opened my bag and took them away while I was sleeping.

In the Lesser Sunda islands, I began on Timor Island. I flew from Jakarta to Kupang, doing some reporting in Kupang, including in the Tuapukan refugee camp, and later Soe, Nikiniki, Kefamenanu, Atambua as well as crossing the border into newly-independent East Timor to visit Matoain, Liquisa and Dili.

I stayed the nights at the Portuguese-built Hotel Turismo. It is an old and beautiful hotel facing the Dili Bay. I used to sleep here when Dili was still occupied by Indonesia. Going back to Hotel Turismo in a new Timor Lorosae is indeed a fascinating experience.

When returning to Kupang, I took a ferry to visit Baa, Oelaba and Oeseli on Rote Island. From Oeseli, I took the small wooden boat to see Ndana Island.  The Ford Foundation, which gave me a grant to partly finance the trips, helped me to take another ferry to go to Maumere on Flores Island. I boarded a public bus to go to Wolowaru, Detusoko, Mt. Kelimutu and Ende.

The Ford Foundation grant also allowed me to go to the Maluku islands. The trip started in Ternate. I then took a speedboat to go to the neighboring Halmahera Island, visiting Galela, Tobelo, Kao, Malifut, Sosol, Tahane and Sidangoli. I spent the nights in Tobelo and Tahane. I also went to Soasiu on Tidore Island. It was the first place ever where I realized that Christians were not allowed to settle on the Muslim-controlled island. I also stayed in Ambon, doing an extensive reporting and interviews, which included a visit to the Waiheru prison, near Ambon, meeting Alifuru leader Semuel Waileruny. Alifuru is the name that embraces all ethnic group in the Maluku islands. 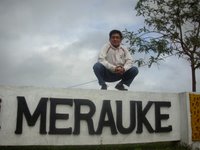 When the Ford Foundation grant ended in February 2006, I used some freelance assignments to be in Papua. This is a very vast island. I have to use planes wherever I go. I visited Jayapura (including Abepura, Padang Bulan, Kutaraja, Sentani), Manokwari, Biak as well as Merauke. In Manokwari, I easily made a short boat ride to Mansinam Island. In Merauke, I rented a mini van to visit the SP-2 transmigration area, where the Benny Moerdani monument, commemorating Indonesia's invasion to Papua, was established.

Three international cities, London, Stockholm and Kuala Lumpur, also had me conducting some interviews. Finally, I have to mention that Jakarta, the metropolitan in Java, is my homebase and where Norman goes to an international school. This is the place where Norman waited for me and listened to each travel story I told him.


Photo captions: Hotli Simandjuntak took my photo in the aftermath of the tsunami in Banda Aceh. In the Merauke airport, Agapitus Batbual asked me to pose for a photo at the entrance of the airport. It took three years to travel from Aceh to Papua
Posted by andreasharsono at 8:40 PM

With all misery, infliction, turmoil, and unrest, this Jakarta and this java-based Indonesia impose on populace of this archipelago and not in slightest sense of cynicism; still I truly adore, admire and mencintai Bangsa Indonesia ini as my motherland, my homeland, soil where I meet the loss of my many dearly loved ones and surely my own, one time later on.

The concept of Indonesian nation has received many debate and argument on her various aspects, like her significance, historical account and many bla bla bla….

Surely, this topic has been in great command of Your mastery…sure thing….

Well……still interesting indeed, I locate at least 2 recountings (may we say reluctant and not keen one …) on Indonesia assumption….

1. ….I used to sleep here when Dili was still occupied by Indonesia….why don’t we say---- was still maintained/hold by/still under possession of……

2. …..where the Benny Moerdani monument, commemorating Indonesia's invasion to Papua, was established….-----the very selection of invasion phrase speaks of the summarizing potency for readers in simulating the image of very evil and shadow of Indonesian troops toward our Papua folk….…though we know benny it is an evil and horror figure in our history with all his sin and his religion Puritanism….heheheheh
Oce oce, tak ada yang lebih huaaaaaaaa, selain membaca menyimak terus perjalanan mas, aku seneng banget banget ama blog in oiiiiiiiiiiiiiiiiiiiiiii