Indonesia and the Act of Forgetting 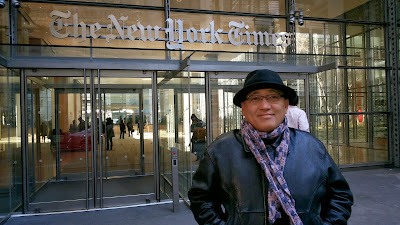 I coincidentally visited The New York Times office in Manhattan when it was publishing my op-ed on Joshua Oppenheimer's film The Act of Killing.

JAKARTA, Indonesia — I grew up in the shadow of the Indonesian massacres exposed in Joshua Oppenheimer’s extraordinary documentary, “The Act of Killing,” which has been nominated for an Academy Award.

I was a couple of months old in October 1965, when the Indonesian government gave free rein to a mix of Indonesian soldiers and paramilitaries to kill anyone they considered to be a “communist.” Over the next few months into 1966, at least 500,000 people were killed (the total may be as high as one million). The victims included members of the Communist Party of Indonesia (P.K.I.), ethnic Chinese, as well as trade unionists, teachers, civil society activists and leftist artists.

My father, an ethnic Chinese, recognized early on the threat to our family, and we fled our East Java town of Jember to the relative safety of the port of Surabaya. There we took refuge while Jember was the scene of savage killings of our friends and neighbors.

Years later, my father’s trusted employee, Man Tuka, would walk with me around Jember and tell me stories about the many lives lost during the massacres. When I was eight or nine years old, he described to me a scene that has haunted me ever since.

Man Tuka told me about how the Jompo River that runs through Jember turned red with the blood of victims dumped into it by paramilitary murderers. He spoke of seeing a raft float by: On it was a baby crying with hunger as it tried to suckle its murdered mother.

In the 48 years since these dark months, the Indonesian government has justified the massacres as a necessary defense against the P.K.I. Its narrative holds that the Communists attempted a coup, murdering six army generals on Sept. 30, 1965, as part of their attempt to make Indonesia into a Communist state. Every Sept. 30 since, a state-owned television station has aired a government-sanctioned film luridly depicting the P.K.I.’s “treachery” and the bravery of the Indonesian soldiers and paramilitaries who “exterminated” that peril.

My generation grew up on this propaganda; we had little or no knowledge of what really happened. Only through Man Tuka and some elderly ethnic Chinese residents of my hometown did I start to learn the truth about what occurred during those months of 1965-66.

“The Act of Killing” has now broken the official silence about the massacres. In response to the government’s unwillingness to approve the film for release in Indonesia, Mr. Oppenheimer made it available in Indonesia for free on YouTube. Despite limited Internet access outside of the cities, the film has been a distressing revelation for younger Indonesians. Indeed, it has provoked a public debate about the need for accountability for those crimes.

The past two years have seen tentative steps in that direction. In July 2012, Indonesia’s human rights commission produced a report documenting the mass killings of 1965-66. The panel interviewed hundreds of witnesses to massacres, torture and rape. President Susilo Bambang Yudhoyono responded by instructing the attorney general to assess the findings and report back.

But some government officials are unhappy about moves toward accountability. In October 2012, Djoko Suyanto, the political, legal and security affairs minister, publicly justified the killings, saying, “This country would not be what it is today” had they not occurred.

Mr. Oppenheimer’s film and the government’s reaction to it are powerful reminders of the culture of impunity and the lack of rule of law that continue to weigh on Indonesia. Impunity expresses itself in a systematic failure to hold accountable members of the security forces and Islamist militants who commit abuses against religious minorities across the country.

The Islamic People’s Forum, the Islamic Defenders Front and other Islamic groups are at the forefront of this intolerance. These groups have attacked the places of worship of Shiite and Ahmadiyah Muslims as well as some Christian churches. Although government officials and security forces have played a passive, or even active, role in such violence, Mr. Yudhoyono’s government has failed to confront those responsible or to obtain any redress for the victims.

The legacy of impunity for the crimes of 1965-66 also extends to a lack of accountability for abuses by security forces operating in Indonesia’s easternmost provinces, Papua and West Papua. Papua is the site of a low-level insurgency by the Free Papua Movement, a small and poorly organized armed group seeking independence. Over the last three years, Human Rights Watch has documented hundreds of cases where the police, soldiers and intelligence officers used unlawful force when dealing with Papuans exercising their right to peaceful assembly. The government’s tight control over the flow of information from Papua complicates efforts by foreign media to expose these abuses.

The government needs to provide accountability for the 1965-66 massacres as a crucial step toward justice for families who lost loved ones, and to work to dismantle the toxic culture of impunity that victimizes Indonesians to this day.

On Sunday, I will watch the Academy Awards ceremony to see if “The Act of Killing” wins an Oscar — and remember Man Tuka and the victims of Jember.


Andreas Harsono is an Indonesia researcher at Human Rights Watch.
Posted by andreasharsono at 11:00 AM