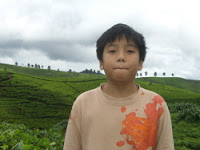 I want to stay with my father forever. Also bring all my things to the apartemen.

In grade 6, levels of education increase thus requiring reasearch. Books are one thing but an even bigger source is the internet. With my father, internet is very easy. But with U-Know-Who, we have to go to a wartel or break the computer with virus and because of expensive by using house internet.

Teach a child maths, science etc. makes them smart. But to make them kind and enjoy learning, the teacher should not shout, pressure & hit, which my mother does. Even teachers at school are better. If a mistake is made, she shouts and screams. Next she says, "Use your logic," at the same time meaning, "You're stupid" and forces us to think. Last she poked the head rudely & roughly saying, "Use your logic" and face red.

There is an old saying, "Point at one, someone points at U."

U-Know-Who points at Andreas, saying he's terrible. Unknowingly many people say she's bad. She treats my maid and my cousin like slaves and me like a toy.

My mother is Voldermort from Harry Potter, merciless to enemy and friends. An addition for power & revenge and a coward by heart. She does not tell the truth. Afraid by people more powerful and she is greedy. I don't want to live with her.


Note
Norman wrote this letter on Nov. 14, 2007 when Rudy Parasdio of the Children Protection Commission asked him to do so. Norman wrote his letter on his notebook. It is a hand writing letter. He asked me to give it to Parasdio. I typed this letter in exactly the same words as were used originally. "My cousin" is a reference to Yosevina Christin Agustina, a college student who lives with Norman's mother. "My maid" is Norman's nanny Maryani. Norman sometimes writes "and" but also "&" as well as "asma" rather than "asthma."

--Andreas Harsono
Posted by andreasharsono at 8:34 AM

It is so sad to read your story. I never like Voldermort either. I can't believe in what your mother had done to you. How could she did it to our little 'Indian Boy'..:)

'Mas Andreas, me and Yati and Dian always call Norman as Indian boy. According to his dialect when he speaks in English.'

I know how sad you are right now, Norman. But I hope you will get the better way in your life. Staying with your father, and bring your things into the apartment.

Hope you always have the courage and the happiness to face the future.
And the important thing, you will take your own experiences to be a lesson when you are a father someday. Caring to each other, more love to everyone.
I know you will. My lovely Indian boy...

came across this blog. thought it was interesting. initially, i thought the "norman" stories were a joke.

if it weren't. shame of lady voldemort. women like her have no business giving birth let alone raise a child.

hope norman can live with daddy so that he can do his internet researches easily.

You know, we know what's good because there is bad. Sometimes bad things happen for a reason. Years from now this experience of yours and your son might turn out as a blessing in disguise. It is understandable that as father and a hum
an being you sometime feel sad and blue. But keep positivity and optimism alive, because at the end of the day, that is what keeps everyone going. I wish you good luck.