When the May 27 quake originating under the sea jolted the Java island, it reduced to rubble a lot of Indonesia's present. It also ravaged the nation's carefully reconstructed past. Alongside the 10,000-odd modern buildings destroyed in the city of Jogjakarta, also list the enchanting Prambanan temple. A world heritage site, this 9th century complex takes its name from the area where it is located, about 18 km from Jogjakarta.

As the city and nearby villages counted their dead, news came in about the damage, perhaps irreparable, that the Prambanan temple had suffered. A less quantifiable, but equally tangible loss: of the Hindu cultural memory of what is now the world's largest Muslim nation.

The temple complex was a picture of devastation: debris from broken walls and intricate carvings were strewn all over the place. Decades of reconstruction involving the piecing together of thousands of reliefs which, in their decrepit condition, were 'stone puzzles', was undone in a few seconds. Agus Waluyo of the Jogjakarta Archaeological Conservation Agency says, "We found wreckage at the Shiva, Vishnu and Brahma temples, and at several minor temples." 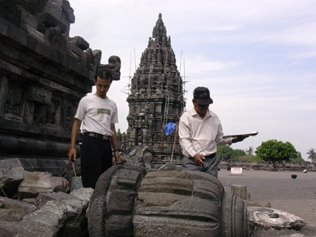 People were relieved to know the stone structures themselves hadn't collapsed. But even this relief was short-lived. Waluyo says, "It will take months to identify the precise damage. We must ensure that (unstable) earth under the temples will not cause the structures to subside." Fortunately, the famous Buddhist stupas of Borobudur, 50 km from Prambanan, survived the earthquake intact. Both temples attract a million tourists annually.

The Prambanan temple was built around 850 AD by either Rakai Pikatan, king of the second Mataram dynasty, or Balitung Maha Sambu during the Sanjaya dynasty. However, it was abandoned soon after construction—and rapidly fell into disuse. Built in the typical Hindu style of tall and pointed architecture, the complex is dominated by a 47-metre-high central structure dedicated to Shiva. It has four chambers, one of which contains a three-metre-high idol of his. The other three have statues of Durga, Agastya and Ganesha each. There are also shrines of Vishnu and Brahma. Also, the Prambanan complex is surrounded by 250 smaller temples.

Prambanan is not a solitary example of Indonesia's Hindu past. Historian Jean Gelman Taylor writes in her book, Indonesia: Peoples and Histories, that Hinduism and Buddhism flourished before Java was Islamised during the 11th and 12th centuries. European historians use the term "Indianisation" to explain archaeological discoveries of Sanskrit inscriptions and sculptures of Buddhist and Hindu gods in Java, Sumatra and eastern Kalimantan. Indonesia's "Indianisation" can also be discerned in local versions of Indian epics, in dance and music and names of places—and also in the existence of Sanskrit words in the vocabulary of the many languages spoken here.

Archaeological investigations show that between 700 and 900 AD, 33 temples and temple complexes were constructed on the southern slopes of Mt Merapi, north of Jogjakarta, which included Prambanan and Borobudur. Some say these temples were abandoned during the period the local rulers clashed with those who had converted to Islam. Subsequent volcanic explosions partially buried these temples under ash; then they were slowly overtaken by thick jungle growth.

Borobudur was rediscovered in 1814 by Lt Governor Sir Thomas Stanford Raffles during the English occupation of the island during the Anglo-Dutch Java war.

Though Prambanan wasn't buried under volcanic ash, restoration work here began only in 1918 under the Dutch colonial rule. The main structure's reconstruction was completed in 1953. But the complex, as such, languished in ruins until the restoration of Borobudur provided a fresh impetus.

The restoration work on Borobudur was spearheaded by Daoed Joesoef, who, as education and culture minister, undertook the project in 1978. Financed by Unesco, the reconstruction was completed in 1983. "Our experts learned a great deal about temple restoration from Borobudur," Joesoef told Outlook. Inspired, President Suharto ordered the restoration of Prambanan to recreate its pristine glory.

In 1985, as the Prambanan restoration was under way, Islamic militants bombed Borobudur, destroying nine Buddhist stupas. They said the government should spend its scarce resources on the poor, instead of bankrolling un-Islamic monuments. Suharto ordered a crackdown on Muslim militants. Subsequently, in the 1990s, the Jogjakarta government built a park around the Prambanan complex, in the process evicting villagers and fuelling protests.

It will be an enormous challenge to once again reconstruct the Prambanan temple. For one, as archaeologist Waluyo says, it will be a gargantuan task to locate the stones used to build the temple. Much of the stonework was stolen before the restoration, and taken to areas far from Prambanan for construction purposes. This is why many parts of the complex have concrete slabs without the characteristic temple carvings.

Joesoef says reconstructing such invaluable cultural heritage shouldn't be hostage to exigencies of the present. "It won't be easy as the government has to first assist the people whose houses have been destroyed," he admits, suggesting that Prambanan may need a coordinated international reconstruction exercise. For Indonesia, though, it's a question about restoring its past without which the present would seem incomplete.
Posted by andreasharsono at 8:28 PM