Mining, Protests and a Young Villager’s Death in Sulawesi 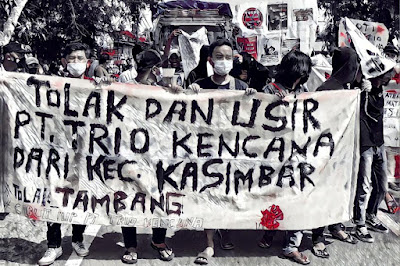 On February 12, a young man was taking part in a seemingly routine protest by the Aliansi Rakyat Petani (Alliance of People’s Farmers) about five kilometers from his home in Tada village in Central Sulawesi. Farmers and other local residents had been organizing almost daily protests since January 2021, demanding the revocation of the license for PT Trio Kencana, a mining company.
But things turned nasty that night. Protesters, angry that the governor had not kept his commitment to speak to them, blocked the provincial road with trucks. The police responded by deploying 15 trucks of their own and water cannons. The authorities turned off the electricity in the area. At around 11:30 p.m., local police started firing teargas to disperse hundreds of protesters blocking the Trans Sulawesi road. They arrested at least 59 protesters.
Protesters alleged that the police used live ammunition to disperse the rally. Nine minutes after midnight, the protesters found the body of Erfaldi Erwin Lahadado, a 21-year-old mechanic. He had been struck by gunfire on his right shoulder.
I checked Erfaldi’s Instagram account. It shows him dressed in a bright yellow jacket next to his Honda motorcycle. His Instagram portrayed the life of a young man: music, family, friends, but no sign of activism.
Why was he on the streets that night?
In August, the Central Sulawesi government had granted PT Trio Kencana a license to start digging for minerals in Kasimbar and South Tinombo districts in Parigi Moutong regency. It’s a huge area of 15,725 hectares, almost the size of Bandung or Washington, D.C. The land contains the homes, farms, schools, clinics and businesses – such as kiosks like the one run by Erfaldi’s mother – of 50,000 people. Parigi Moutong is also Central Sulawesi’s largest food-producing area.
PT Trio Kencana says that it is mining gold on the Kasimbar site and has promised “environmental protection, community service, and transparency” on its website, but it is not clear to local residents how these commitments are being kept. Villagers are concerned about the possibility that their land will be confiscated and are angry about ongoing exploration activities, as three mining pits in Kasimbar have flooded rice fields nearby.
Central Sulawesi, according to the Mining Advocacy Network, an Indonesian environmental group, is facing an ecological crisis because of excessive mining operations. The province has issued a total of 135 licenses over the last decade — 28 for an exploration phase and 107 others for operations already in production. The Mining Advocacy Network has called for the Ministry of Energy and Mineral Resources in Jakarta to revoke the license for this mining operation.
Among local residents’ chief complaints is that they say they were not consulted about the deal. They are afraid that more digging will pollute the soil and water in the area. Governor Rusdi Mastura promised on February 7 to meet with the affected communities. He has yet to do so. But he has called on the police to arrest “provocateurs.”
The Central Sulawesi police chief, Rudy Sufahriadi, has promised to investigate the fatal shooting. His team found 60 bullet casings at the scene and sent them for ballistic examination in Makassar, South Sulawesi, confirming the villagers’ claim about live ammunition. Many local residents are skeptical that the police will be held accountable. The police promised to announce the result in March.
Rosmawati, Erfaldi’s mother, has repeatedly asked the police and authorities to find the person who shot her son and bring them to justice. She is hoping that his death will be the last among the farmers and others struggling to protect their land and environment.
Posted by andreasharsono at 5:42 PM