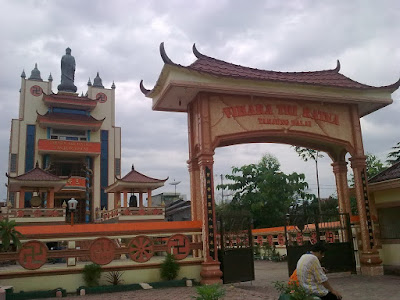 Tri Ratna Buddhist temple in Tanjung Balai, near Medan. Gerakan Islam Bersatu advocates the removal of the six-meter Buddha statue, reasoning that it is too prominent in the predominantly Muslim Tanjung Balai.
Photos by Novita Simamora
This year, Indonesia has had many reasons to pat itself on the back. In May, it was elected to the United Nations Human Rights Council and hosted a successful Asean summit as the bloc’s chair. In both forums, the nation boasted of its human rights record, economic development and regional leadership.

But outside this self-congratulatory rhetoric, the country also has many things to beat itself up for.

Let’s imagine a scenario: in the same year as its UN and Asean feats, the Ministry of Religious Affairs bows to hard-line Muslim pressure and orders the dismantling of Borobudur — the largest Buddhist temple in Indonesia and a major tourist attraction.

This may sound ridiculous, but it has already happened — albeit on a smaller scale — in the town of Tanjung Balai, North Sumatra, where the ministry had a tall statue of the Buddha taken down from a temple.

The story begins in November 2009, when the Tri Ratna community celebrated the construction of a new Mahayana Buddha statue on top of their temple’s roof.

The ceremony was led by the town mayor, Sutrisno Hadi, and the Religious Affairs Ministry’s director general of Buddhist affairs, Budi Setiawan. But months later, following pressure from Islamist groups, both Hadi and Setiawan reversed their support and backed calls for the statue’s removal.

Tanjung Balai is a small town, just four hours’ drive from Medan. It is home to diverse ethnicities — Malay, Javanese, Sundanese, Batak, Nias and Chinese — and it has a small Buddhist population, primarily descendants of Chinese traders and artisans. But like elsewhere in Sumatra, a conservative form of Islam became the dominant religion.

The appearance of the Buddhist statue elicited a violent reaction from Islamic leaders. Wahhabi leaders under the United Islam Movement (Gerakan Islam Bersatu) organized rallies and protests in May and June last year, calling for the statue to be taken down. They argued that it tarnished the image of Tanjung Balai as a Muslim town.

The demonstrations prompted the Indonesian Council of Ulema (MUI) to issue an edict ordering the statue to be moved to another “honorable place.” Budi, the ministry official, concurred.

On Aug. 2, the mayor convened a forum of regional leaders to determine the fate of the Buddha statue. The panel included Tri Ratna chairman Suwanto Saimah, the MUI, ministry officials and representatives from the local council, military and police. The forum was largely an exercise in coercion.

Unfortunately, the story of Tanjung Balai is not. The incident reflects not only a troubling pattern of religious discrimination, but also the complicity of state institutions in acts of religious persecution. 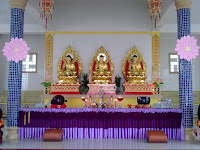 The minority Muslim sect Ahmadiyah as well as Christians have faced increasing discrimination and violent attacks. According to the Communion of Churches in Indonesia, there were 430 attacks against churches over the past six years. Jemaah Ahmadiyah documented 183 attacks against their villages, mosques and houses since President Susilo Bambang Yudhoyono issued a decree against the sect in June 2008.

Buddhism is one of six officially recognized religions in Indonesia, and as such, the right of Buddhists to practice their religion is to be protected.

The Tri Ratna temple has met building regulations, so it is unclear on what basis the local officials thought it was right to have the Buddha statue taken down.

Authorities violated religious rights under the International Covenant on Civil and Political Rights, which Indonesia ratified in 2006.

Five days after the officials forced Suwanto to sign an agreement to remove the statue, he died of a heart attack. His death postponed the immediate removal of the statue, but on April 6 , the Ministry of Religious Affairs reaffirmed the regional council’s ruling that the statue should be taken down.

Since then, activists supporting the Tri Surya Buddhist community say they have faced harassment and threatening text messages and phone calls.

Two weeks after the ministry decision, Indonesia gained the most votes at the UN General Assembly to be a member of the UNHRC, which requires members to “uphold the highest standards in the promotion and protection of human rights.”

In its voluntary pledges to the General Assembly, Indonesia claimed that it was “living proof that democracy and Islam can coexist peacefully, harmoniously and productively.”

If the country is serious about its human rights commitments, then the Religious Affairs Ministry should protect and promote religious freedom.

For starters, Budi should revoke the decision to remove the statue in Tanjung Balai and publicly affirm the Buddhist community’s right to worship their icon.

Yudhoyono must also revoke all laws and decrees that allow discrimination against religious minorities to prove that Indonesia truly promotes tolerance.

Andreas Harsono is a Jakarta-based consultant for the Asia division at Human Rights Watch.
Posted by andreasharsono at 7:37 AM