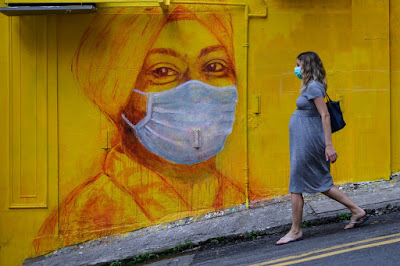 A pregnant woman wearing a face mask as a precautionary measure walks past a street mural in Hong Kong, on March 23, 2020. (AFP/Anthony Wallace)

BOY, am I glad I am way past my childbearing years! Imagine being pregnant, especially for the first time, and having a baby during this unprecedented global pandemic. Not only do you have fears of being infected, you would also be worried sick that your unborn baby could be too.

An expectant mother needs to have regular prenatal visits. How do you do that with the social distancing regulation in place? Well actually, there is such a thing as teleconsultation, to replace in-person visits, but they are still relatively few in Indonesia.

What about contraception that needs replenishing every one to three months? Or emergency contraception (the morning-after pill). That certainly is something that can’t be done virtually. Virtual sex, anyone?

Pregnancy was one of the topics discussed at the second International NGO Forum on Indonesian Development (INFID) webinar on women and COVID-19 held on Friday, presented by Zumrotin K. Susilo from the Women Health Foundation, the first speaker.

Nur Iman “Boni” Subono, the third speaker, on the editorial board of Jurnal Perempuan (Indonesian Feminist Journal) since its inception in 1995, drew attention to those at the front line of the battle against the coronavirus: nurses. First of all, the ratio of medical workers (including nurses) to the general population is 1:100,000. So pandemic or not, don’t get sick, OK? Especially if you are poor.

As of 2019, nurses in Indonesia number 345,508, with almost half in Java and the rest spread out thinly in other areas.

Even in normal times, nurses are vulnerable to workplace violence, but in the current pandemic atmosphere of fear, frustration and stress, they become punching bags in all areas of their lives. In the workplace, they are treated harshly, threatened, even raped. On the way to work, they face bullying, sexual harassment and worse.

What a relief to come home, no? No. Especially if the husband can’t go to work because of large-scale social restrictions (PSBB), feeling emasculated because he has to stay at home while his wife, a nurse, has to go out to go to work. Guess what happens? Domestic violence, which is on the rise generally anyway.

With traditional gender roles still in place, women still have to do the bulk of housework and to deal with restless kids who suddenly have to be schooled at home — if the nurses can go home, that is.
With the overload of patients, COVID-19 and otherwise, sometimes they have to stay for weeks at their workplace.

Imagine the extreme stress and fear of getting infected and dying, which does happen, especially since they are not always provided with adequate personal protective equipment (PPE). No hazmat suit? Hey, no problem, plastic raincoats will do!

As Clare Wright wrote in The Guardian: “A pandemic isn’t a war, but our healthcare workers are heroes.” However, instead of being treated as such, Boni found in his research that nurses are stigmatized and treated like pariahs when they return to their communities who fear being infected.

And obviously, their children suffer. I saw a heartbreaking photo in Boni’s presentation of a little boy with a distraught look on his face holding up a sign that read: “My mother is a nurse. She distances herself from me so that she can help you.”

What nurses in Indonesia experience also happens to nurses in many other countries. And while what they experience may be extreme, nurses — as caregivers — actually epitomize the life of many women worldwide, even in this day and age.

But wait, good news! “All six countries with the best response to COVID-19 have one thing in common: Women leaders.” This is the title of one of several articles I read with the same observation. These countries are New Zealand, Norway, Iceland, Germany, Belgium and Taiwan.

On the other hand, “COVID-19 Could Set Women Back Decades on Gender Equality” is the title of another article that typifies many others with similar messages.

Why the gap? It’s only six countries out of 195 in the world! And anyway, simply having a woman leader is not enough; a feminist or gender perspective has to be included in every national and international policy.

In a misogynistic world, that’s an uphill battle, but in combating COVID-19, the six women leaders have proven that they can do better than their testosterone-laden counterparts, so perhaps they can do better in other areas as well!


The writer is the author of Sex, Power and Nation.
Posted by andreasharsono at 8:00 AM