Human rights are under attack in post-tsunami Indonesia

Aceh civilians, especially women, are under siege from Sharia-inspired criminal bylaws which have become increasingly common across Indonesia 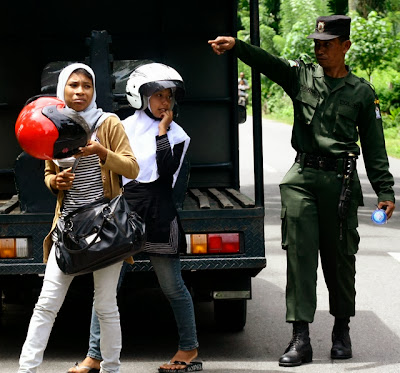 Here’s a seasonal snapshot from Indonesia’s Aceh province: on 20 December, dozens of militant Islamists rallied outside one of the largest hotels in Banda Aceh, the provincial capital, threatening violence if the hotel management attempted to organise Christmas or New Year’s Eve celebrations. The protest was to support an edict from the province’s leading Islamic cleric’s organization, the Consultative Ulama Council, prohibiting Muslims from any recognition of the Christmas season.

Welcome to Aceh, nine years after the Indian Ocean tsunami that devastated the province and left 221,000 of its people dead or missing. The unprecedented international response to the tsunami, which affected 14 countries including Indonesia, included US$8bn for emergency assistance to Aceh’s survivors and to fund reconstruction of roads, schools and housing. The massive destruction also jump-started peace talks between the Indonesian government and the insurgent Free Aceh Movement, or GAM, which ended the province’s long-running civil war in return for significant autonomy for its provincial government. Australian military personnel were among the first foreign responders to the Aceh tsunami zone, quickly establishing an emergency field hospital. Since then, the Australian government has spent or pledged at least A$151m to deliver what it described as “real impact in the quality of people’s lives” in Aceh.

The quality and security of the lives of many Acehnese remains in peril, though, and this time the threat isn’t a natural disaster. Instead, women and religious minorities are the target of discriminatory laws, intolerance and abuse.

An October 2007 regulation in Aceh on the construction of houses of worship has resulted in unreasonable limitations on the ability of religious minorities to build and renovate churches and temples. In May 2012 alone, that law prompted authorities to forcibly close 17 Christian churches and a house of worship for one of Aceh’s many indigenous native faiths. On 17 June 2012 Islamist militants destroyed the GBI Peunayong Protestant church on the pretext that it was illegal. Governor Irwandi Yusuf had inflamed the situation by declaring in May 2011 that several non-Sunni sects and religions followed “deviant teachings.”

Such intolerance is becoming distressingly common across Indonesia. Indonesia's Setara Institute, which monitors religious freedom in Indonesia, documented 243 incidents of physical violence in the first 10 months of 2013, compared with 264 in all of 2012, up from 216 in 2010.

Women in Aceh are under siege from four Sharia-inspired criminal bylaws enacted in July 2003 that impose punitive restrictions on freedom of association and expression. These laws apply to both women and men, but local activists say that the Sharia police, who enforce them, apply them more often and more harshly against women and girls.

One of the laws imposes “seclusion,” making it a crime for two adults of the opposite sex who are not married or related by blood to be together in an isolated place. This broadly worded law has been interpreted to prohibit merely sitting and talking in a quiet space with a member of the opposite sex. The authorities have even targeted people eating or studying together. Sharia police officials say they sometimes force women and girls suspected of violating the seclusion law to submit to “virginity exams,” which are invasive and demeaning. Violators face between three and nine lashes from a rattan cane.

Another restrictive bylaw imposes “Islamic” public dress requirements for Muslims. In practice it imposes far more onerous restrictions on women, requiring them to cover their hair with the hijab headscarf in public and forbidding them from wearing body-hugging clothing. In Banda Aceh, the Sharia police regularly organise sweeps against women with tight jeans. Aceh’s Sharia police chief told Human Rights Watch, “We focus on everybody, but it’s usually women that make mistakes.” Police arrested Putri Erlina, 16, in 2012, allegedly for violating her town’s seclusion law. After local media reported her arrest, Erlina wrote a note saying she could not endure the shame and hanged herself.

A series of bylaws enacted in recent years in Aceh’s 23 regencies have further restricted women’s rights. The city of Lhokseumawe rolled out a regulation last January banning women from straddling motorcycles – only riding side-saddle is permitted. In neighboring Bireuen, a local regulation enacted in May prohibits women from dancing. In Meulaboh, in western Aceh, a decree imposed in January 2010 forbids women from wearing pants.

These discriminatory laws have become increasingly common across Indonesia. An August 2013 update by Indonesia's official Commission on Violence against Women reported that the national and local governments have passed 342 discriminatory regulations since 1999, including 79 local bylaws requiring women to wear the hijab, backed by various sanctions.

At the nine-year anniversary of the tsunami that hit Aceh, Australia can take pride in the spirit of generosity and friendship it expressed through assistance to survivors and reconstruction efforts. But Australia’s substantial investment in post-tsunami Aceh is under attack from intolerant forces intent on depriving the province’s women and religious minorities of “real impact in the quality of people’s lives.”

The Australian government should bolster its financial investment in Aceh with a human rights one by making clear to the Indonesian government that discriminatory laws and rights violations against women and religious minorities in Aceh and across Indonesia are unacceptable. ***

Andreas Harsono is an Asia researcher at Human Rights Watch, based in Jakarta
Posted by andreasharsono at 10:00 AM