A Baby was Shot to Death in Merauke


On Sunday, May 30, 2010, several police officers tried to arrest a Papuan man in the Transito area, Merauke. They fired some shots. A stray bullet apparently hit Merlina Tanggipaimu in her head, striking her left ear out on the right one.

Baby Merlina is only two years old. She died instantly in her wooden hut.

Her mother Amelia Biagaimo, 24, was devastated.

The police chief in Merauke said, "It was a musibah." 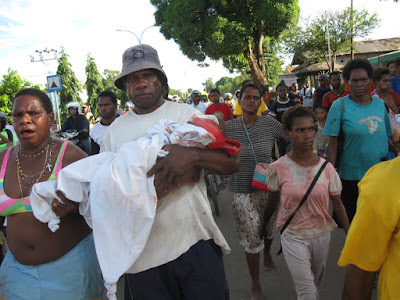 At around 6:30am. Merlina Mei Tanggipaimu's grandparents brought her dead body to the Merauke police station. They wrapped her body with a white blanket. Blood is on their shirts. She is her parents' first child. Her parents were devastated, screaming and screaming.

An intel, riding a motorcycle with a white helmet, kept on following them. He rode with them, stopped with them and later returned to the neighborhood with them. And then he left. 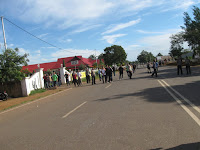 When the angry protesters were approaching the Merauke police station, we saw the police as well as many military intelligence people, already waited outside the station.

Some witnesses told me that those officers, waiting outside the Merauke police station, included members of the Special Forces or Kopassus. I am not sure what they're doing. These angry parents and the shooting of a baby is not a military affairs. 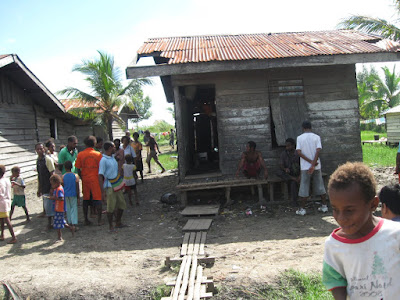 Baby Merlina was just getting up from her sleep on Sunday morning. She went to the toilet, outside the wooden hut, and returned to the hut when a bullet pierced into her head.

Neighbors visited her house Sunday morning, about one hour after her tragic death. Not a single Jakarta media published the story. Papua is not a human story in Jakarta. Papua is just a story of separatism, primitive people with penis gourd and an area of our "beloved homeland." 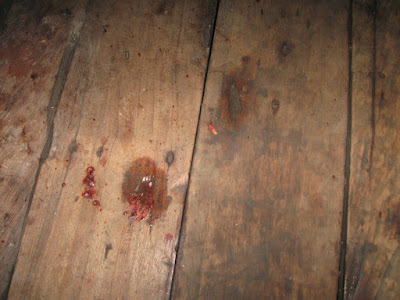 The baby blood is on the wooden floor. The Gudang Arang residents cannot find the bullet that penetrated through her head. She was probably shot from a distance of about 15 meters. It is not surprising that residents cannot find the bullet. Gudang Arang is an area where Dutch administration used to build coal warehouses in Merauke. The coal was needed for ships entering the Merauke seaport. Gudang Arang is a neighborhood of seaport workers. 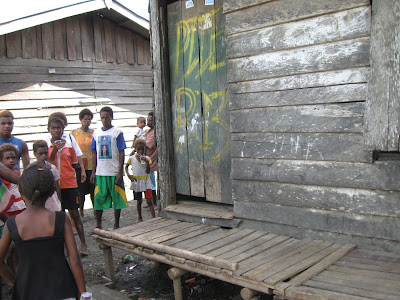 Mother Ameliana and father Frangky Tanggipaimu heard some shots near their house that morning around 6am. I was jogging near this neighborhood when two men told me about the shooting. I am not familiar with this neighborhood. But I kept on monitoring their protest. 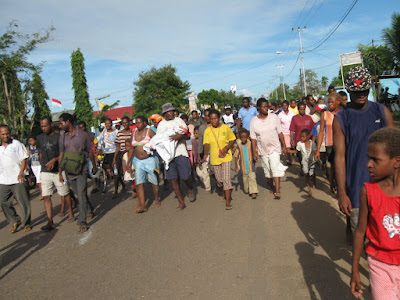 The parents, the grandparents and their neighbors, mostly Mappi ethnic group, walked along the Mandala boulevard in Merauke, passing the Catholic church and the Muslim mosque and aiming at the Merauke police station. The police later apologized, saying that the shooting was a "musibah" (accident).
Mandala is the name of the Indonesian military operation to take over Papua in 1962. Major Benny Moerdani later wrote in his biography Profile of a Soldier Statesman about the Naga operation, a smaller part of the Mandala operation. There is a Moerdani statue in Merauke. The street is named after the 1962 operation. 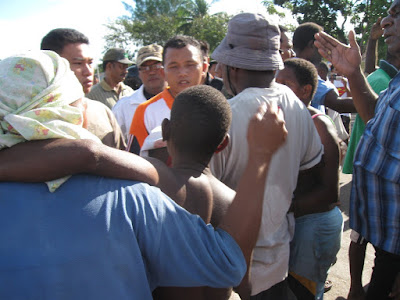 Commissionaire Joko Priyadi, a high ranking police officer, faced the grandparents and the mother. He repeatedly said that the stray bullet was a "musibah, musibah, musibah." The word "musibah" is a word familiar to the Papuans. The Tanggipaimu family demanded an investigation into the shooting. Joko said it needs to have the lethal bullet to examine whether it really comes from the police. Like most police officers in Papua, Joko comes from Java Island. Most of them do not understand local cultures in Papua. Papuans also face daily discrimination from the Indonesian officialdom. Some Papuan intellectuals write about high rates of death among Papuan mothers and children due to poor health services. Baby Mei is another victim of this negligence. Musibah. Musibah. Musibah. 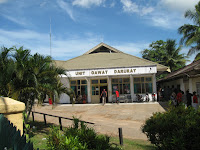 In a bid to make sure that the bullet comes from the police, the family brought the baby to a Merauke hospital. It is already Sunday noon. The hospital obviously cannot find the bullet. It penetrated her head. Now without the bullet that killed the baby, the police claimed it will be difficult to investigate the killing. Officially they promised that they will investigate the killing. But accountability is a big question mark in Merauke. This is the same police station which denied various beatings conducted by Indonesian soldiers against Papuan youth.
Posted by andreasharsono at 10:52 AM