When Tom Rosenstiel and I wrote “The Elements of Journalism: What Newspeople Should Know and the Public Should Expect,” we felt pretty confident there would be an interested audience among journalists in the United States. But since its publication in 2001, we’ve been surprised that the book is attracting a wide international audience. As of the beginning of this year, the book is being published in 18 countries. 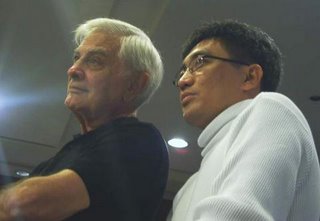 From November 30 until December 17, 2003, thanks to Andreas Harsono, a 2000 Nieman Fellow, I had a chance to see how concepts rooted in 17th and 18th century Western thought appear to journalists of a newly emerging Eastern press. Andreas had arranged for the translation of the book into Bahasa Indonesia; organized an intense islandhopping five-city schedule of university lectures, working lunches, and visits with media owners, and accompanied me as interpreter.

Judging by the challenges and questions I received, two of the elements described in the book—“a discipline of verification” and “journalism’s first obligation is to the truth”—were of most interest to the journalists there. One element prompted skepticism, the other generated confusion.

The skepticism focused on verification as a defining element of journalism primarily because of their own observed behavior of the American press as represented by the widely reported scandals of Stephen Glass at The New Republic and Jayson Blair at The New York Times. This allowed me to use the Committee of Concerned Journalists’ Traveling Curriculum, inspired by the book, which we have presented in newsrooms around the United States. The part we focused on there included the idea of “transparency,” a concept informed by the simple idea that you never deceive your audience. And you do this by making sure each story meets these needs:

● That you tell your audience what you know but also what you don’t know about the subject of he story;

● That you never imply more knowledge than you actually have;

● That you tell whom your sources are, how they are in a position to know, and what potential biases they might have.

Stephen Glass and Jayson Blair might never have been published had the transparency standard been applied to their work. The Indonesian audiences seemed to find that concept worthy of consideration, but I can only wonder what they thought later when they read about Jack Kelley at USA Today.

The notion of truth led to confusion because of years of post-modern philosophical debate about the nature of truth. At almost every stop we engaged in lively discussions as I tried to explain the “practical truth” of journalism: a truth obtained over time by the careful accumulation of evidence. Methods of arriving at the truth includecontinual reporting, calls, letters and op-ed articles from the public, with follow-up reporting. The story is always subject to revision as new evidence is discovered.

The most encouraging thing to me was that in the largest Muslim nation in the world and one that has been free of dictatorial government for only six years, these and other basic ideas about journalism in a free and open society were matters of active engagement and serious discussion at every university and news organization in every city I visited on the islands of Java, Sumatra and Bali.

Another encouraging thing to me was that Indonesia, which has had no long history of a free press, after only five years of legally free publication is at about that same level of development I have seen in the same time frame in eastern and central Europe, areas that have had a previous history of press freedom. The Indonesian press may be a bit more unruly and more tenuous but with the same penchant for soft porn, gossip and rumor, including the virulently persistent rumor that 4,000 Jews did not go to work in the World Trade Center on September 11th. And like some countries in Latin America, they are still plagued with “envelope journalism,” a practice of dictatorial governments that has spread to commercial interests to reward journalists for favorable treatment, a practice that allows press owners, in turn, to pay scandalously low wages. But all of these seem to be transitional growing pains, and all are under lively and serious debate among journalists.

Another troublesome trend I saw is the fear of Indonesia’s political leadership of too much freedom. As the country moves toward its first free election of a president there are renewed efforts to return more government control. These fears spawn multiple efforts that loom like a three-headed dragon over Indonesia’s free press and include:

● A government commission to define and enforce the licensing laws for electronic press enacted in the post-Suharto reforms is only now being named, and some of the appointees being discussed share a fear and disdain of the free press;

● Legislative proposals are pending to extend to the print press the requirement already in the law for licensing of the electronic media;

● A series of as many as 70 changes in the criminal code of provisions specifically designed to restrict press freedom.

On my last night in Jakarta, I was lucky enough to be part of a reunion of the country’s Nieman Fellows Sabam Siagian ’79, Goenawan Mohamad ’90, Ratih Hardjono ’94, and Andreas. It was a warm evening of fellowship fueled by good food, good wine, good memories, and a conversation that helped me put two and a half weeks in Indonesia into some perspective. My conclusion that I jotted down as I flew back home was this:

The future of a free press and freedom of expression in Indonesia still hangs in tenuous balance. The problems I cited, exacerbated by a difficult economic climate and the chronic instability of civilian control generated by the terrorist threat, are each serious enough to stop or even reverse its continued development.

But the journalists are reporting on these issues. They are debating and analyzing them with an energy, intelligence and skill that, at their best, can easily compete in the current international communication’s climate. Equally important, they are beginning to build the infrastructure of independent organizations needed to spread and protect shared values over a sprawling and diverse region just as others are building nongovernmental organizations that nurture a free society.


Bill Kovach, a 1989 Nieman Fellow, is chairman of the Committee of Concerned Journalists and former Curator of the Nieman Foundation.
Posted by andreasharsono at 9:10 PM