A Palace for the Arts in Ubud


Along the narrow main road in Ubud are markets, a theater, internet cafes, bike rentals and eateries. The atmosphere is relaxed, and the scent of incense from temples wafts on the winds.

Puri Lukisan ("palace of painting"), near the market, houses a significant collection of historic Balinese paintings. Here, the myths of Bali are on display. Bima is present. So is Garuda, and a witch, and several figures from the wayang. But there are also pictures of bare-breasted maidens bathing in a pool. Unfortunately, some of the paintings have deteriorated over time. Jean Couteau, researcher and author, says in his book Museum Puri Lukisan that the collection bears witness to the renewal of the arts of painting and sculpture in Bali. Until the 19th century, Balinese artists worked exclusively to serve the needs of religious institutions and the aristocracy. The Dutch colonial influence, however, created conditions for the opening up of Balinese arts, which then were further encouraged by the development of tourism in the 1920s.

"The collection now consists of more than 200 paintings, and maybe 80 pieces of sculpture," says the director, Tjokorda Bagus Astika. Most of these works were originally collected by Rudolf Bonnet. Any discussion of the museum must mention Bonnet, Walter Spies, and Tjokorda Agung Sukawati, each of whom played a significant role in the renewal of Balinese fine arts.

Walter Spies was born in Moscow in 1895 into a family of German descent. In 1923 he travelled to the Netherlands East Indies, where he worked for a while as a musician in the Yogyakarta kraton. There, Spies met a prince from Ubud, Tjokorda Raka Sukawati, a member of the Volksraad who had studied for a while in France and who was married to a French woman. The prince invited Spies to Ubud and introduced him to his younger brother, Tjokorda Gede Agung Sukawati. Spies decided to spend some time in the small town.

Over a period of several years, Spies came to be known as the foremost non-Balinese authority on Balinese culture. He was variously an insect collector, a composer, a film production consultant, an author of books and articles, a patron of the arts, and a choreographer — he was the first to arrange the now-famous kecak dance as a secular performance. Spies opened up his house to guests from abroad, including Rudolf Bonnet, a Dutchman of Huguenot ancestry.

These two European artists gave added momentum to the renewal of the Balinese arts. Spies and Bonnet provided artists with materials and instructed them in new techniques. Spies himself oversaw the training of 12 to 15 young painters in his own house. He also helped them market their work.

In 1936 the Pita Maha association was established. This name, which was taken from ancient Kawi, means "honored ancestors." The association was headed by Ida Bagus Putu, while the artistic committee included Tjokorda Agung, Bonnet, Spies, and the painter I Gusti Nyoman Lempad. The association became established in art centers around Bali, and involved between 120 and 150 artists.

Each week, committee members met at Spies' house. The association sponsored exhibitions in Batavia (now Jakarta), Bandung, Medan, Palembang, Surabaya, and abroad in the Netherlands, Paris, New York, and Nagoya. Bali became established as an artistic center equal to China, Japan, and India. Lempad, in particular, became acknowledged around the world as a major artist. And then, World War II broke out. Accused of sexual misconduct, Spies was expelled from Pita Maha. Bonnet protested and also withdrew from the association.

In 1942, Pita Maha was dissolved. Spies and Bonnet were arrested by Japanese troops. Sadly, during his return to Germany, Spies' boat was torpedoed and sank off Sri Lanka. Bonnet was held in Makassar but eventually returned to Bali after Indonesian independence. He used the revolutionary period to do research, train young painters, and collect the works of Balinese painters. He revived his plans to establish a museum in company with Tjokorda Agung.

They purchased land near Tjokorda Agung's family seat in Sukawati. In 1953, the Ratna Wartha Foundation was established to develop the museum. In January 1954, Prime Minister Ali Sastroamidjojo, a close friend of Tjokorda Agung, came to Ubud to lay the cornerstone. Donations flowed from the Indonesian government, from the Dutch cultural association Sticusa, and from the Ford Foundation. Two years later, the museum was inaugurated by Minister for Education and Culture Muhammad Yamin. The name "Puri Lukisan" was coined by Yamin.

Bonnet and Tjokorda Agung died in 1978. Their remains were cremated in a shared ceremony in 1979. Puri Lukisan continues to attract the interest of artists from other areas, including such notable figures as Affandi, S. Sudjojono, Dullah, and many from abroad. These artists come to study in Ubud and to find inspiration from one of the finest collections of Balinese art in existence. 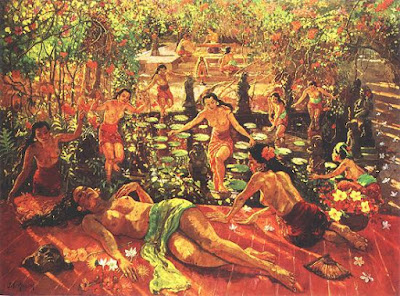 Adrien Le Mayeur (1880-1968): Bermain
I wrote this piece, without a byline, for the book Celebrating Indonesia: Fifty Years with the Ford Foundation 1953-2003. It was published in 2003. I did many interviews and research in Ubud for the two-page story. I also researched Le Mayeur's paintings in his museum in Sanur. Le Mayeur made Bali his home in 1932.
Posted by andreasharsono at 9:13 AM