Murder at Mile 63 - The Ambush

In early August 2002, Antonius Wamang started out on foot with at least six other men, including Johny Kacamol, Yulianus Deikme and Elias Kwalik, from a jungle camp near Kali Kopi (Coffee River) . Their destination was the main road that connects Tembagapura, the mining town of Freeport McMoRan, to Timika, a sprawling urban center in the lowlands. It is a piece of the 79-mile road that connects Grasberg, Freeport’s highest mining site, at mile 79, down to the Amamapare port site.

According to Wamang, the journey took nearly three weeks. Wamang, and his men, were preparing to launch an armed assault on Indonesian military troops traveling on this road. The group set up a temporary camp in a ravine below mile 63 of the road.

One of Wamang’s co-conspirators named Hardi Tsugumol was also very busy getting ready for “an action” on the road, according to Deminikus Bebari, who heads the Human Rights Bureau of the Amungme Indigenous Council (Lemassa) in Timika. In the weeks leading up to the ambush Tsugumol “amassed food and other supplies,” wrote Bebari, in a 2002 report prepared for Indonesian police investigators. Bebari interviewed Tsugumol several times.

When Hardi Tsugumol was a boy, growing up in an Amungme village, he wanted to be an Indonesian soldier. As an adult, Tsugumol cultivated relationships with active duty Indonesian soldiers stationed in Timika. He once worked in a lobster company in Biak and later moved to the island of Java, marrying a Javanese woman. The couple separated and Tsugumol’s wife maintained custody of their only child. Tsugumol returned to Timika alone. In the lead up to the ambush Tsugumol “contacted his friends in the military to buy ammunition—300 bullets for 600,000 Rupiah, via his friends who were in Kopassus and Brimob,” wrote Bebari.

On Saturday 31 August 2002, just before dawn, three men, including Tsugumol, were “picked up at the Kwamki Lama neighborhood by a white Toyota Land Cruiser from Freeport’s Emergency Planning Operation (EPO) division,” wrote Bebari. The EPO is a Freeport division that provides logistical, transportation and communication supports for the more than 3,000 Indonesian security personnel stationed in the area. Tsugumol, who died in prison last Friday, declined to reveal the vehicle’s driver, saying that he has to protect his “friend.” He only admitted to Bebari on his deathbed that they had traveled along the Timika-Tembagapura road, past five checkpoints, on the morning of the attack.

Decky Murib, an Amungme informer who later changed his story, told police investigators that 10 soldiers picked him up at Hotel Serayu in Timika at 8 am that same day. Murib said that he was surprised to see Kopassus Captain Margus Arifin leading this group. “He was supposed to be in Bandung,” said Murib. Formerly, Arifin had been the Kopassus liaison officer at Freeport’s EPO office. Murib told police investigators that Arifin brought him in a car with license plate number 609 through the Freeport checkpoints and dropped him, with four solders at mile 62 of the Tembagapura road. Arifin reportedly continued north along the road with the remaining solders.

Freeport operates its check points to register every car and person traveling along the road. Workers have to show their employee ID cards at the checkpoints. Locals have to show special permits issued by Freeport’s Community Liaison Office. There are also special Freeport-issued visitor cards. “Only the soldiers usually refuse to report at the checkpoints,” said Lexy Lintuuran, Freeport’s corporate security chief. According to Linturan a car with the license plate 609, the car Decky Murib claims he was in, passed through the checkpoints on the Timika-Tembagapura road on the morning of the attack.

That morning a group of school teachers from the Tembagapura International School at mile 74, went on a picnic around mile 62 of the road. The rugged terrain around this high-elevation section of the road is covered by old-growth cloud forest. Patsy Spier, who was part of this picnic with 10 others, said that it was rainy and foggy. “We ended up leaving the picnic early,” said Spier.

The teachers traveled in two white Toyota Land Cruisers. Rick Spier, her husband, drove the first SUV with four colleagues riding as passengers. Ted Burgon, the school’s principal, sat next to Rick Spier. Patsy traveled in the second car driven by Ken Balk. She sat next to Bambang Riwanto, her Javanese colleague.

When Antonius Wamang, and his men, approached the ambush site, the group was carrying three weapons. “We had one M16, one SS1, and one Mauser,” Wamang said. One white Freeport SUV went by, and then another filled with men in camouflage. They did not shoot. When a third car passed, they thought that Indonesian troops might also be inside. They opened fire. But, they were wrong about the identities of the passengers.

Pasty was traveling in the second SUV. Suddenly, in the fog, Patsy saw her husband’s car stopped by the side of the road. Another car was speeding towards her on the opposite side of the road. They ran Rick’s car off of the road, Patsy thought. Turning around in her seat to get a good look at its license plate, Patsy felt a sharp stab in her side. She had been shot. The windshield shattered. Blood splattered all over the SUV interior.

Wamang does not know who fired the first shot. In the initial burst of gunfire it was hard to tell who was shooting. “With everyone shooting, you can’t hear well ... If I had shot first, then I would have been able to tell,” recalled Wamang. 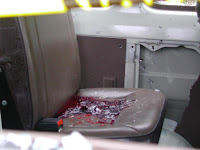 The first shots, fired by a sniper at a moving car, were deadly. They came from straight in front of the first car. The windshield of Rick Spier and Ted Burgon’s car exploded. Within moments they both sustained fatal wounds. Wamang’s group—a rag-tag band of teenagers and men with limited weapon training—shot at the cars from the side. They wore black shorts, black t-shirts, and black plastic headbands. They were all barefoot.

“I did not see the shooters,” said Patsy Spier. Ken Balk, in the same car as Patsy, saw a pair of black army boots underneath a truck, some 20 yards away from where their vehicle had come to a stop. He feared the boots would start coming closer. Three other vehicles, a yellow Mac truck and two Canadian Pacific dump trucks, were also riddled with bullets.

“All of us were shot, wounded. Bambang was laying on top of me, bleeding. I was worried about my husband but the shooting just continued,” said Spier. Bambang, a Javanese school teacher, died in the attack. Two weeks later, Bambang’s wife, Happy, gave birth to their baby boy in Jogjakarta. Among the 11 people who were wounded in the attack, there were three Indonesian drivers. The two drivers who were seriously injured, Loudwyk Worotikan and Johannes Bawan, were employees of a Freeport contractor company. Mastur, the third driver, sustained light injuries. 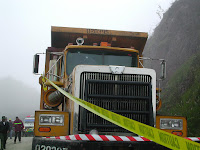 Another pick up truck was also shot but its driver, Daud Tandirerung, managed to speed away from the crime scene. Two colleagues, Yohan Jikwa and Kamame Moom, were riding with Tandirerung. They told investigators that they saw “two men in ski masks.” According to witnesses, and a reconstruction by police investigators, the shooting lasted between 30 to 45 minutes.

Wamang’s men were edgy. They did not approach the stopped cars. “We weren’t there very long. We immediately retreated,” Wamang told us. We asked him, “Were you there thirty minutes?” “No,” he said, “30 minutes is way too long.” Of the six magazines given to Wamang by Sergeant Puji, only 1½ magazines (about 45 bullets of 5.56 caliber) were used by his men that day. As Wamang’s group retreated, the other unknown gunmen continued shooting. No one followed as they beat a hasty retreat on foot.

Decky Murib, the Kopassus informer who later changed his story, said that he had heard some shots while he was waiting, and drinking, at mile 62. Infantry Captain Margus Arifin later picked him up again and told him that “your people (TPN) are responsible for those shots.” Arifin denies Murib’s testimony, saying that he was in Bandung.

A total of thirteen guns were used in this assault on the five cars, according to a ballistics report issued by the Police Central Forensic Laboratory (Pusat Laboratorium Forensik Polri) on 19 December 2002: six SS1s, five M16s, and two Mausers.

Ch. Syafriani, one of the Lab’s ballistics experts, reiterated the data contained in this report on 29 September 2006 in the Central Jakarta district court —the lab analyzed 30 bullets of 5.56 caliber, 77 bullet fragments, 94 bullet casings of 5.56 caliber, 7 bullet casings of 7.62 caliber. A total of 208 bullets, shells, or fragments were recovered from the crime scene.

Wamang’s account of his weaponry is consistent with the evidence presented by chief prosecutor Anita Asterida: his group carried a total of three guns. The prosecution did not account for the ten other guns that were shot into the teacher’s vehicles. 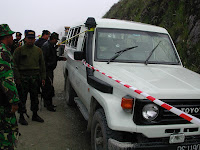 Wamang told us that other gunmen were present. He saw other men shooting into the cars, but he could not clearly identify them. “The testimony of Anton Wamang and others at the crime scene is clear and consistent: there was a second group of shooters,” says Paula Makabory, a human rights worker in Timika who repeatedly interviewed Wamang over the course of three years in conjunction with government investigators.

Andrew Neale, a Freeport expatriate, came upon the ambush site from the north. Neale jammed his vehicle into reverse and drove back to the Kostrad military post about 500 meters away at mile 64. According to Lexy Lintuuran, Freeport’s security chief, there is a Kostrad company stationed there. “It has more than 100 soldiers,” said Lintuuran. Why didn’t the Kostrad soldiers come sooner? Did they hear the 30-45 minutes of gunfire?

When the soldiers finally did arrive at the scene, the attackers melted away. The newly arrived soldiers briefly fired their guns. Then the shooting abruptly stopped. “I assumed that the shooters left after the TNI came,” said Patsy, using the acronym of the Indonesian military. She remembers a soldier, dressed in full camouflage and black boots, who stood over her, glaring down. Victims were immediately transported to a nearby hospital and soon evacuated to bigger hospitals in Australia and Indonesia.

On 1 September, one day after the attack, the body of Elias Kwalik (aka. Mr. X) appeared near the crime scene. Senior Indonesian military officers claimed that their troops had shot one of the Papuan guerrilla attackers. Kopda Wayan, an Indonesian soldier with Satgas Pam 515 Kostrad, claimed to have shot Kwalik while patrolling a mountain near the crime scene at 11:40 am. 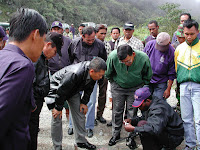 At 1:30 pm senior military and police officials—including police chief I Made Mangku Pastika—arrived at the side of the road where Kopda Wayan was standing with the body. There were no blood stains on the ground near the body. The body was sent to the Tembagapura hospital at 3:30. Dr. Kunto Rahardjo conducted an autopsy. He concluded that Mr. X had been killed more than six hours before he was examined at the hospital. Mr. X had not eaten for more than 12 hours before his death. He had suffered from a severe intestinal worm infection and had a condition called hydrocele which caused his testicles to swell to 17 cm in diameter.

Kopda Wayan claims that Mr. X was standing on a small ledge approximately ½ meter in width on the side of a steep cliff when he shot and killed him. A police reconstruction conducted on 10 September 2002 found no blood stains on the ledge, at the base of the cliff, nor along the route where Kopda Wayan and his patrol members reportedly dragged the body. The Timika-Tembagapura road is 78 meters from the base of the cliff. This rugged terrain is covered with dense roots and loose rocks. The police reconstruction deemed Wayan’s story implausible. The body reportedly fell 8 meters off the cliff, yet did not have any broken bones.

The 29 December 2002 report by Indonesian forensics experts found that the blood type of Mr. X was “O” and that dirt and leaves from the site where Wayan claims to have shot the man did not contain any blood of this type.