In a report published on May 13, Human Rights Watch (HRW) accused Indonesia of subjecting women applying for the armed forces to discriminatory virginity tests, and called President Joko Widodo to put an end to the practice.
"The Indonesian armed forces should recognize that harmful and humiliating 'virginity tests' on women recruits does nothing to strengthen national security," said Nisha Varia, HRW's women's rights advocacy director.
Based, among other things, on interviews with 11 women - military recruits and fiancées of military officers - who had undergone the test, the rights group found the practice includes the invasive "two-finger" test to determine whether female applicants' hymens are intact.
Under condition of anonymity, the rights group quotes a Jakarta military doctor in the report as saying that the tests occur in military hospitals across the country with female military applicants tested en masse in large halls divided into curtain-separated examination rooms.
Female military physicians typically conduct the test, the report said, adding that the recruits are told these were crucial to preserving "the dignity and the honor of the nation." Last November, the group revealed that Indonesia had also been conducting similar tests to filter female police recruits.
In a DW interview, Andreas Harsono, Indonesia researcher at HRW, says the tests have probably been conducted for decades, with some women being told it's about honor or preventing "naughty girls" from marrying young officers. 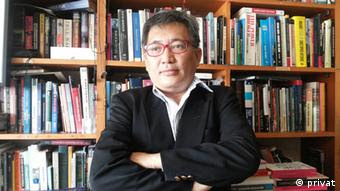 Human Rights Watch has condemned Indonesia's use of "virginity tests" to filter female police applicants. The group's Andreas Harsono says some officials claim they want to get rid of "prostitutes" among the applicants. (24.11.2014)

A look at the Papua conflict - Indonesia's 'low-level insurgency'


Indonesia at Frankfurt Book Fair: 'The outcome will surprise many'


Indonesia 'in a bind' over Beijing's assertiveness in South China Sea

But a woman, who comes from a military family and refused to undertake the two-finger test in 1984, said that the reason is to prevent "naughty girls" from marrying young officers. She said that only active young women usually dare to approach single officers.
Older military wives, whose daughters were mostly more passive, might get lesser chance to marry the officers. Thus they need the so-called virginity test and they defend it fiercely.
How long have these tests been conducted?
They are conducted in the army, the navy and the air force. Human Rights Watch interviewed a military wife who undertook the test in 1964 while her older sister did that in 1962. It means it's been going on for decades. But it's still unclear when this practice began.
According to Dr. Irawati Harsono, a retired policewoman who protested against "virginity tests" in 1964, her class was already tested. She said such tests were institutionalized during the era of the military-backed President Suharto (1965-1998).
What happens to applicants and fiancées who "fail" the test?
Some applicants and fiancées, whose hymen were torn, still managed to join the armed forces or to marry their men. There are various reasons. Young women who failed the medical examination said they did not know whether it was related to their "virginity test" or other parts of the medical examination.
Others argued that they had had accidents when they were younger. A woman said she fell down from a book shelf when she was six years old. The doctor, who treated her, wrote a letter, stating that she had that accident.
Indeed she did not know it. Only when she was 15 years old did her mother give her that letter. "It might be important for you one day," she recalled her mother as saying. She was shocked.
Some male officers reportedly said that they had already had sex with their fiancées. They have no problems with the torn hymen. They got married. But there're also young women whose relationships were broken up because they refuse to take the discriminatory test.
What sort of experiences have the women interviewed by HRW made in this regard?
All of them said it's painful, humiliating, and discriminatory. They often asked, "Why men were not tested?" But some of them said there was nothing that they could do about it. A major said she was surprised to see the protest among policewomen against the test.
She never imagined military women and military wives would dare to challenge their own institution. But some women accept the test, believing that they're virgins. They believe that they need to be virgin to be military officers. Last November, HRW revealed that Indonesia had also been conducting similar tests to filter female police recruits
What do you call on the Indonesian government to do?
There're already protests in Indonesia, involving the National Commission on Violence against Women as well as many women's rights NGOs and some policewomen, asking the government to stop the degrading and cruel test. Some ministers, including Health Minister Nila Moeloek, said it's outside their respective authorities to ban the test.
It involves some ministers including the Ministry of Defense, the Armed Forces and the National Police. Now it's up to President Joko Widodo to stop the test. He's obviously the boss over all of these government agencies. Human Rights Watch asks President Widodo to ban the practice.
Andreas Harsono has covered Indonesia for Human Rights Watch since 2008.
The interview was conducted by Gabriel Domínguez.
Posted by andreasharsono at 1:00 PM No comments: