In 1989, when I was 24 years old and almost graduating from university, I met Achmadi (1949-2001), a coachman who led a network of horse-drawn cart coachmen, to resist a government plan to ban their vehicles --locally called "dokar" in Salatiga, Central Java.
I helped them, writing op-ed pieces, learning about the failures of motorization, organizing their union, and finally securing a plot of land near the Salatiga hospital to be the dokar terminal.

Achmadi was a good listener. He's a radical in fighting against motorization policy. But he also wants to understand the limitation of the local government. He opposed Suharto's Golkar Party ruling party to overcome the union, called the Persatuan Said Dokar (Dokar Coachmen Union), but he also knew he should be diplomatic.

It was under the Suharto authoritarian rule. The Indonesian military basically controlled the civilian government.

Achmadi, himself a Javanese Muslim, now I realized, also a champion of religious freedom. I worked with the union for three years. Achmadi asked all street vendors in the dokar terminal to open during the Ramadan fasting month (until now). He also insisted his Noborejo village cemetery not to divide between Muslim and Christian villagers. It remains a single cemetery today.

I left Salatiga in 1993, working as a journalist in Jakarta. I still called him from Cambridge, doing my Nieman Fellowship on Journalism. I remember we talked about how expensive to make such a call. In 2001, our friend, Sukardi, sent me a letter from Salatiga, informing me about Achmadi's death. I was already back in Jakarta, editing the monthly Pantau magazine.

I visited his grave in 2004, meeting his two children Mujiono and Tri Wulandari. The dokar terminal is still there. His two children are still in touch with me.
Posted by andreasharsono at 12:17 PM No comments:

A Political Prisoner Died Inside Prison

Fredy Akihary, a Moluccan political prisoner, died in a hospital near his prison in Porong, East Java, on June 18 after a heart attack inside his cell. He was 60 years.

Yonathan Dji, a Christian pastor in the prison, said Akihary had usually played keyboard during Sunday services, “He never complained, he never grumbled. He’s such a gentle soul.”

Dji organized the service before the body being brought to the airport in Surabaya, near Porong, flying 2,000 kilometers to the east of Indonesia, landing at the Ambon airport, brought to the seaport for nearby Haruku Island, and finally a truck to bring him back to his native Aboru village.

His wife Yacomina (nee Usmany) Akihary welcomed her husband, “He left home 11 years ago healthy and fit, now he is going home in this coffin.”

On June 28, 2007, farmer Fredy took a boat from Aboru, joining a group of Moluccan activists, mostly farmers like him, going to Ambon. The following morning, they took part in the Family Day festivities at the Ambon stadium.

They scandalized President Susilo Bambang Yudhoyono, who was in the audience with a group of foreign diplomats, by performing the cakalele dance and unfurling the officially banned Republic of South Moluccas flag.

Yudhoyono immediately ordered arrest. Police got those 28 activists, later also their supporters. They were tortured and within months the Ambon court had convicted 66 of them for “treason,” sentencing them to prison terms of seven to 20 years. Akihary got 15. They were moved to various prisons on Java Island in 2009.

In May 2015, President Joko Widodo, who succeeded Yudhoyono, promised to release them. Minister of Law and Human Rights Yasonna Laoly promised to move them to Ambon prison, at least, closer to their families. Nothing happened.


Only in June 2016, Yacomina got some non-governmental help to fly to Surabaya and to meet her husband in the prison. It was their last meeting. In Aboru on Thursday, Yacomina and her six adult children, relatives and friends, held a prayer, played music and buried Fredy Akihary.

May he rest in peace.


Posted by andreasharsono at 5:23 PM No comments: 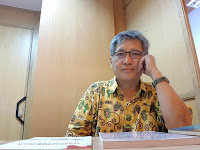