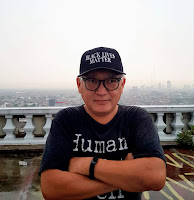 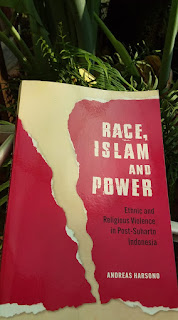 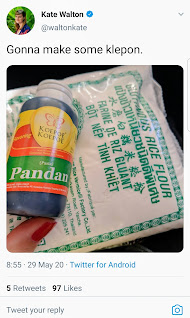 Kate Walton wanted to cook klepon and she tweeted it – showing a bag of flour, pandan, coconut etc. – and Indonesians on social media were buzzing!
A white Australian woman in Canberra could make klepon, the pandan-flavored rice balls filled with palm sugar and coated in grated coconut.
She tweeted a photo of her father: “Dad was very impatient for the klepon to cook.”
Walton, 32, speaks fluent Indonesian, writes about Indonesia, has many Indonesian friends, and loves Indonesian food and culture.
She was banned from entering the country she had lived in since 2011 when immigration officials deported her in June 2019 after she was seen taking photos of a street protest in Jakarta.
She left behind her partner and their cats in Jakarta. Walton is not the only one. Several Australian journalists and academics are on the Indonesian government’s visa blacklist, meaning that their decades of research and linguistic skills go to waste.
Immigration officials stopped two others last year. One is Ross Tapsell, an expert on Indonesian media at the Australian National University. And the other is Dave McRae from Melbourne University, a writer on sectarian violence around Lake Poso, Sulawesi.
Social-cultural visas
They traveled to Indonesia on social-cultural visas, rather than on the specific visas required for academic research.
Immigration officials deported a US environmentalist, Phil Jacobson, from Indonesia earlier this year over a visa violation. The authorities detained him for three nights in January 2020, seized his passport, and accused him of using a business visa to work as a journalist in Palangka Raya.
Following the involvement of the US embassy, Jacobson was deported back to the US.
In 2014, the Indonesian authorities convicted Valentine Bourrat and Thomas Dandois, two French journalists from Arte TV, of journalism activities without the appropriate visa and jailed them for 2.5 months in Jayapura, Papua.
In 2015, Rebecca Prosser and Neil Bonner, two British journalists from National Geographic, were jailed for three months on Batam Island, near Singapore, on similar charges.
Every country is entitled to protect its borders, enact immigration laws and regulate visas. But Indonesia’s 2011 Immigration Law is especially harsh.
Any foreigner “who deliberately misuses or engages in activities inconsistent with the intent and purpose of the residence provided to him” can be punished with up to five years in prison and fined up to Rp 500 million (US$35,000).
The law also criminalises “every person who orders or provides an opportunity for foreigners to abuse or engage in activities inconsistent with the intent or purpose of the residence provided to him”.
Meanwhile, getting a journalist visa or a research visa for Indonesia is very complicated.
18 units in ‘clearing house’
Journalists’ applications go to the Foreign Ministry, which will take it to a “clearing house” involving 18 working units from 12 government bodies.
The bodies include the Religious Affairs Ministry, the State Secretariat (the Bureau for International Technical Cooperation), the Tourism and Creative Economy Ministry, the National Police, the Communication and Information Ministry, the Home Ministry, the Law and Human Rights Ministry with two participating units (Immigration and Trafficking of Migrants), the State Intelligence Agency, the Strategic Intelligence Agency and the Coordinating Political Legal and Security Affairs Ministry.
The clearing house serves as a strict gatekeeper, often denying applications outright or simply failing to approve them, placing journalists in a bureaucratic limbo.
At times the process has operated as a de facto ban on foreign journalists. Sensitive subjects that delay or deny applications include Papua, religious freedom, environmental sustainability and LGBT rights.
The clearing house system means any one ministry or bureau has veto power, which generally means that the most media-adverse department carries the day. Foreign researchers also have to go through a rigorous vetting process to get a research permit and then a visa.
It involves a clearing house at the Research and Technology and Higher Education Ministry with representatives from intelligence and security agencies.
The permit process seems to be even stricter now with the 2019 Science and Technology Law, which contains draconian criminal sanctions. The effect of the new law will be to discourage foreign researchers from coming to Indonesia, which would be detrimental to scientific advancement and international collaboration.
Extra sensitive in Papua
In places such as Kalimantan or Papua, officials are extra sensitive when seeing foreigners in their cities. In 2016, when Kate Walton was running a training programme in Timika, Papua, for an international development agency, she was detained and questioned for about five hours, despite having a visa that specified she could work in Papua.
She told me that the immigration officials thought she was “doing research illegally”.
In 2018, immigration and military officials detained and questioned a BBC correspondent, Rebecca Henschke, for 17 hours in Timika even though she had a journalist visa and a travel permit to be in Papua. Exhausted, she and her BBC crew abandoned their reporting plan.
I know Kate Walton, Phil Jacobson and other scholars and journalists well. They may have revealed uncomfortable truths about Indonesia but they also love this country very much.
We need people who will speak the truth. The health of a democracy depends on the quality of its journalism – local, national and international media – and its openness to academic research.
The Indonesian government should reform its laws to simplify the process for journalists and researchers to enter the country.
And in the interim, President Joko Widodo should encourage government officials to allow entry to journalists and academics, even those who have something critical to say about the country.
Andreas Harsono works for Human Rights Watch. He is a founding member of the Alliance of Independent Journalists, also sits on the board of the American Indonesian Exchange Foundation, the binational Fulbright Commission for Indonesia.
Posted by andreasharsono at 6:36 PM No comments: 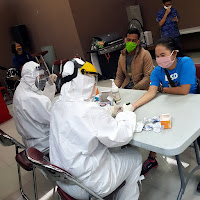 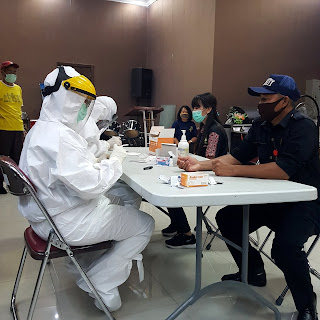 Posted by andreasharsono at 10:17 AM No comments: