JAKARTA - It wasn't so long ago that Chinese writing was banned from public places here and Chinese schools and newspapers prohibited. But walk into the former office of Suharto, the retired Indonesian strongman who maintained these laws in an attempt to integrate the ethnic Chinese community, and a large decorative poster of Chinese characters greets visitors.

"In the old days I would have been arrested for this," said Dino Patti Djalal, an adviser to the government and the current occupant of Suharto's office as he glanced back at his poster. "This shows the progression of Indonesia," said Djalal, who is not Chinese. "We now take multiculturalism as a given in life." 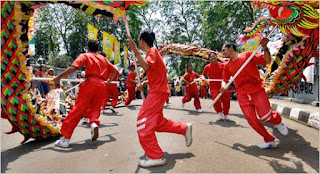 A traditional Chinese dragon dance, which would have been prohibited not too long ago, was part of Indonesian independence day celebrations earlier this year.


After centuries of segregation, periodic violence and tension over their higher levels of wealth, Indonesia's Chinese community, which is estimated to make up 1 to 2 percent of the country's population of 245 million, is now enjoying what many are calling a golden era.

"The situation of the Chinese has never been as good as today," said Benny Setiono, the head of the Chinese Indonesian Association, a nonprofit group that represents the community. "We feel more free, more equal."

As someone whose forebears arrived here from China something like eight generations ago — he has lost count — Setiono speaks with authority when he says the Chinese community is more secure than it has ever been, just eight years after anti-Chinese riots, part of the unraveling of Suharto's authoritarian rule, left scores of Chinese dead and shops burned.

One of the main reasons for optimism today is a fundamental change in Indonesian law: The country has redefined what it means to be a "native."

A citizenship law passed earlier this year proclaims that an indigenous Indonesian is someone who was born here to Indonesian citizens, a radical departure for a society that separated the Chinese in one way or another through colonial times and more recently during Suharto's 33-year reign that ended just after the riots in 1998.

Other laws have erased the preferential treatment for "pribumi," or indigenous groups, in bank lending and the awarding of government contracts, a policy that still exists in Malaysia, where racial tensions are creeping higher.

In the eight years since Suharto stepped down, Indonesia has dropped the draconian rules that banned expressions of Chinese culture and adopted Chinese New Year as a national holiday.

The horrors of anti-Chinese violence in 1998 were the prime impetus for the legal overhaul. But Indonesians also realized that espousing the concept of a "native" could be explosive for everyone, not just the Chinese.

"The question of who was here first became very dangerous," said Andreas Harsono, a journalist researching a book on nationalism in Indonesia. "The logic has been manipulated by many politicians."

The so-called transmigration policies of Suharto had dispersed hundreds of thousands of families, mainly Javanese, across the archipelago, creating conflicts with other ethnic groups.

Today, instead of using the word "pribumi," some Indonesian politicians claim they are "putra daerah," or local sons, and contrast this with "pendatang," or newcomers. A country that sometimes seems to have as many ethnic groups and dialects as inhabited islands (about 6,000) will probably never be clear of racial rivalries, but tensions are nowhere near the levels of a few years ago.

As late as last year, a U.S. court of appeal ruled that the threat of violence was enough to justify a Chinese Indonesian to seek asylum.

Today in Glodok, a warren of warehouses not far from Jakarta's old port that was badly damaged during the 1998 riots, a consolidated peace now reigns. Chinese shop owners and their employees say they cannot recall any racial arguments breaking out in recent years.

"I don't feel any tension," said Phie Ching Huat, the manager of Inticom, an electronics shop. Phie, whose Indonesian name is Sukino, says many ethnic Chinese families now send their children to schools that teach Chinese dialects, mainly Mandarin. And with the rise of China as a world power, learning Chinese is becoming popular among Indonesians of all ethnicities.

"You can hear Mandarin and Cantonese everywhere," said Phie, whose relatives' shop was burned during the riots.

Indonesians say mentalities are also changing here, especially the notion that all Indonesian Chinese are rapaciously rich, a common perception during the Suharto years when a select group of Chinese cronies controlled large, high-profile businesses.

Tension involving overseas Chinese has been a recurring theme in Indonesia and throughout Southeast Asia, both before and after countries in the region became independent. Like Jews in Europe, the Chinese were often traders or financiers, and many, although far from all, achieved commercial success.

During the days of Mao Zedong in China, overseas Chinese were looked upon with suspicion in Indonesia, and tens of thousands were killed in anti- Communist massacres of the 1960s.

This is now all ancient history for some young people. "There are some very rich Chinese, but there are some very poor Chinese, too," said Sayidah Salim, a 20-year-old student at the Islamic State University, outside Jakarta. "If people want to work hard they will earn more money."

Djalal, the adviser to the government, credits the Chinese government for changing attitudes inside Indonesia about the country's Chinese minority. "They are projecting a very friendly, benevolent face," he said, referring to Beijing. Like many other countries in the region, Indonesia is wooing tourists from China.

Setiono, of the Chinese Indonesian Association, says his organization is reaching out to poorer Indonesians of all ethnicities and providing food and medicines. Ethnic Chinese, he says, also need to be more mindful of the wealth gap and must work to reduce it if racial harmony is to be maintained.

As attitudes change, so does language. The word "pribumi," which was spray-painted on buildings during the 1998 riots by non-Chinese owners who wanted their homes or businesses spared, is heard much less frequently today. Pribumi organizations that were once predicated on ethnic distinctions have sought different vocations. The Indonesian Indigenous Business Association, a group that once lobbied for preferential treatment for pribumis, now has an ethnic Chinese vice-chairman and focuses on improving the lot of small and medium-size companies.

"We don't want to be associated with a racialist identity," said Suryo Sulisto, the head of the business association, which goes by the Indonesian acronym Hippi.

Sulisto says a small minority of hard-liners in the association, which has two million members, are still seeking preferential treatment for pribumis — in effect, non-Chinese companies. But their voice is weak, he said.

"I was able to convince them that in the 21st century you can't fight for something that is discriminatory," Sulisto said.

Indonesian Chinese will continue to live with the memory of the 1998 riots for many years. Susanto, an ethnic Chinese wholesaler interviewed in his office, searched through his laptop for a widely distributed video of the anti-Chinese violence and projected it onto his wall. "I'm not showing you this to scare you. It's to remember," he said when images of looters ransacking stores came into focus.

Ethnic relations have improved so much, Susanto said, that he has no complaints today.

"Day to day there is no discrimination," Susanto said. "I think we have a good future here."
Posted by andreasharsono at 7:52 AM