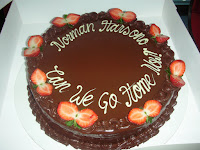 We celebrated Norman's birthday yesterday at his school and also at our apartment with a simple dinner. Norman was 10 years old. I bought a chocolate cake at the nearby Hotel Mulia.

My friend, Indarwati Aminuddin, who works for the WWF Kendari, gave some money to buy goodies for Norman and his classmates. Indar usually played with Norman when she was still working in Jakarta some years ago. Eva Danayanti and Rina Erayanti, two other friends, voluntered to buy the goodies at the Carefour shopping center. They wrapped the goodies beautifully.

Sapariah and I went to Norman's school, Gandhi Memorial International School, at about 11 am. We waited for a while for the school's lunch break. At 11:25 we went to his classroom. 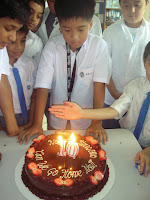 Whoilla! His friends immediately sorrounded the cake. Just imagine if you are being sorrounded by more than 20 children, aged between 9 and 12, wanting to look at the cake or to touch it. Norman earlier asked me to order the baker to write, "Can we go home now?" It is a sentence that the impatient birthday boy likes to say. It is also a sentence that Flash of the Justice League like to tell his friends. Flash, the fast runner, is Norman's hero.

We lighted up the candles that formed the number "10" and sang, "Happy Birthday." Some boys tried to sing the song in Mandarin. Norman smiled and shook hands with his classmates. We took several photos. Sapariah cut the cake and distributed it among the students. 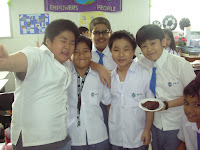 Alas! We forgot to bring spoons. The students had to eat the cake with their fingers or their lunchbox spoons. Tommy Turtle, Norman's friend, said the cake is very good. Some students asked for more cakes. Mr. Mohid, the class teacher, also joined this small party. We also talked about a class tour into a printing press.

The party ended at about 11:40. We cleaned up the classroom. I brought out a bundle of trashes and drove Sapariah to her office. I went back to the apartment to prepare for dinner. 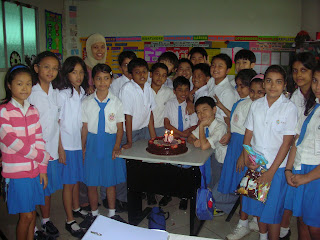 Norman went back home in the afternoon. He watched TV and insisted to buy a toy as his present. I wanted to buy him either a handphone or a computer desk. They are more important for him. I bought him a computer and put it into his mother's house. They don't have a computer desk though. They just put the computer on a make-up table. I also think that he needs a handphone in this metropolitan. But he is still a child. Norman still wants to have a toy as his present. 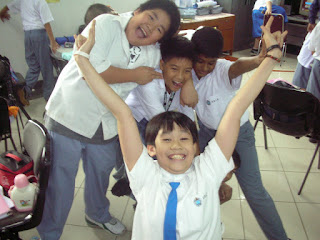 Esti Wahyuni, our old friend who now works in Ende, came to the apartment pretty late. Norman was about to sleep. The other guests didn't turn up. It was a very private party though only for Sapariah, Esti (and supposedly her boyfriend Hairul Anwar), Norman and me. Hairul planned to bring along reporter Luther Kembaren.

Norman was happy when going to sleep at night. But he is still fighting for a truck toy rather than a handphone. I love you so much Son.
Posted by andreasharsono at 8:58 AM

send my greeting for my luvly brother NORMAN...... i really miss him....
HAPPY BIRTDAY NORMAN.... hope u'r life will be better...