What kind of investment that yields a 500-percent profit? Annur Sukarya, a water vendor in Bandung, might provide one example. Water trade! It is not difficult. It sells a highly needed commodity.

Sukarya simply took tap water from his house and sold them, in 30-litre jerry cans, at a price more than six times than the one he pays the Bandung Public Water Company, or locally known as PDAM. “I’m just trying to help my neighbors,” he argued.

Sukarya lives in Cicadas, one of Bandung’s oldest and most crowded working class areas. He sells a jerry can of water at 500 rupiah, or around US$ 6 cents. The deliverymen, who bring the water to consumers, subsequently sell the water at 1,000 rupiah per jerry can. 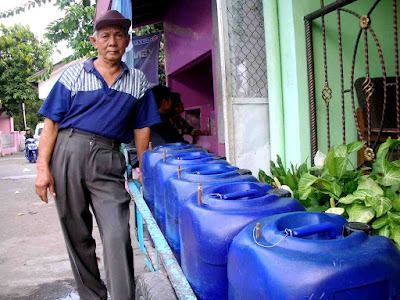 Annur Sukarya with his water cart and the jerry cans
Welcome to Cicadas! It is one of the areas where PDAM serves poorly. Many Cicadas houses have tap water albeit no running. “Sometimes we joke that we pay only for the wind inside our pipes,” quipped Harsono. His tap only delivers water every other day, “It is only one hour, between 5:30 and 6:30 in the morning,” he said. His neighbors used water from their wells, for shower, but bought Sukarya’s water for drinking and cooking.

Bandung is Indonesia’s fourth largest city, dominated by the Sundanese ethnic group and located only two hours driving from Jakarta. Sundanese is the second largest ethnic group in Indonesia after the Javanese. During the colonial period, the Dutch built tree-lined boulevards, art deco villas, gardens, and fountains, earning Bandung the nickname of “Parijs van Java.” It was a beautiful, greenish and flowery town. When the Dutch left Java in the late 1940s, Bandung experienced massive urbanization.

The population skyrocketed from 230,000 in 1940 to one million by 1961. It created social tension. In 1963, an anti-Chinese riot broke out in Cicadas, spreading to many other parts of Bandung. In the 1970s, oil boom in Indonesia pushed this population further to two million. Now it is a living space for more than three million people, with chronic problems such as waste disposal, floods, chaotic traffic system and water crisis. Today PDAM could serve not more than half of the Bandung population. Officially it cannot install new water tap but corrupt officials could always benefit from new installations at marked up prices.

Rufina Handayani, a homemaker in Kopo Permai area, said, “Almost all houses in Kopo Permai have no tap water.” Handayani buys eight to nine gallons of water for drinking and cooking at 4,000 rupiah per gallon. She spends 130,000 (US$150) per month on water.

Mulyani Hasan, a young journalist living by herself, pays 800 rupiah per jerry can in her Ciwastra neighborhood. She said, “I can’t even use my well water to brush my teeth. It is so murky.” Her house is located behind a complex of shopping malls, including a Carrefour, office buildings and star hotels, which very probably used powerful pumps to suck up water from deep artesian wells. “The water vendors sell water from their PDAM taps. If I want to install my own tap, I have to pay five millions,” she said.

Fitriadi Alibasah, a broadcaster at radio Mara FM, said that everyday his station receives a water complain. Most callers complained about their tap waters stop running, erroneous bills or vanishing water meters. “Some people also complained when seeing their neighbors could have a new installation when officially PDAM, for many years, says no more new installation due to the lack of water sources,” said Alibasah. It is a common suspicion that PDAM workers themselves steal the water meters for new installations.

Ati Kusmiati, a homemaker in Turangga area, said, “Suddenly I received a bill, stating that I have not paid the tap water for some years. It was totaled at 800,000 rupiahs when I usually paid only 30,000 per month.” Kusmiati did not keep all his water receipts. She had no option but paid. “Later it happened once again but this time I collected all my bills. I showed them the receipts. PDAM just decided that it was a mistake. That’s all,” she said. 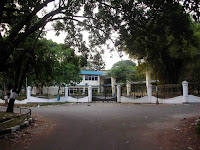 PDAM spokeswoman Melliana Saptarini routinely addressed the public concern by repeating her daily ritual, “We apologize for the inconvenience. We will send our officials to investigate the problem.” Sometimes something happened. But mostly nothing happened.

The Bandung administration, which owned PDAM, tried to solve these problems. In 1974, the Asian Development Bank helped PDAM with a US$11.5 million loan. It was extended again in 1979 with another US$8 million credit. But PDAM could not return the bank credit as well as its interests.

In 2002, the Bandung government planned to privatize PDAM. The Adelaide-based South Australia Water submitted a proposal to take over PDAM. It also offered to pay the ADB loan, then amounted to 298 billion rupiahs.

PDAM president Soenitiyoso Pratikto rejected the plan. Pratikto mobilized his workers to rally against the plan from their head office on Badak Singa street. They visited Gedung Sate, or the Bandung government office, with 12 water trucks, yelling and watering its compound. Politicians supported such a call on nationalist grounds. The plan was finally shelved.

Ironically, a few months later police questioned Pratikto on corruption charges. His collaborator was found guilty for embezzling a piping project. Pratikto claimed his innocence. Bandung mayor Dada Rosada replaced Pratikto despite his refusal to hand over his job to a successor. Today his legal case is still hanging in the air. “Journalists rarely see him now. We heard that he moved to Jakarta, working with Jakarta party bosses,” said radio broadcaster Fitriadi Alibasah.

Pratikto’s saga also revealed another dimension of PDAM’s management. Its workers are mostly members of the notorious militia organizations, Angkatan Muda Siliwangi and Pemuda Pancasila. Pratikto himself is a member of the Angkatan Muda Siliwangi. Indonesian Army officers established the militias in the 1960s to fight communism. Now these organizations controlled many semi illegal businesses, including the water installation. Their members also regularly support competing politicians and generals.

This October, Pratikto’s succesor, Jaja Sutardja publicly said that the company plans to ask Indonesia’s Ministry of Finance and the House of Representatives in Jakarta to write off the ADB loan, totaled at 300 billion rupiah, or around US$33 million. “The interest is too high, the loan had grown from 190 billion to 300 billion rupiahs,” said Sutardja.

Not everyone in Bandung is happy with such an idea. “It means that they want to wash their hands,” said Harry Harsono. His colleague, Fauzi Zulkarnain, said that PDAM is run like a mafia network. “Everybody knows that it has many thieves and robbers,” he said.

Dadan Junaedi, an activist of the Working Group for Water Community, questioned such a policy, saying that the problems did not originate from the ADB loan. Junaedi questioned the PDAM management. “It’s not transparent. We don’t know for sure how they manage PDAM,” he said.

Junaedi cited an Eco Asia survey that concluded that the PDAM problems laid on the water distribution and the water management sectors. PDAM is also among 110 troubled water companies in Indonesia. But it is also among 44 water companies whose prices and expenses are considered to be reasonable. “The government should solve this problem. Water is a human rights,” said Junaedi.

Many Bandung residents, however, are getting indifferent with this water crisis. They have been living with this problem for more than 50 years. They give up hope that their government can solve the problem. There is no sense of crisis.

Now their options are quite limited. They could either bribe PDAM officials to install expensive water tap or set up a deep and costly artesian well. Unfortunately, the poor people, like those living in Cicadas or Kiara Condong, cannot afford these options. They have to rely on water vendors like Annur Sukarya.

Inter Press Service Version
Posted by andreasharsono at 7:44 AM

hello, i want to introduce my beatifull mentawai island with white sand beach

I don't know if you read your comments everyday but I will like to contact you. I am presently in Bandung, doing research on water vendors. My name is Genevieve, from Canada, and my e-mail address is: esmigi@hotmail.com
Thank you