More than 60 prize-winning journalists from dozens of countries gathered in London on Aug. 4-7, talking about several issues like terrorism and environmental damages while looking for ways to monitor those who stay in power and to find the bad guys in this increasingly worrisome world.

They held the meeting at City University in London. They are members of the International Consortium of Investigative Journalists which was established to encourage cross border investigations.

I also attended the meeting and took the unofficial title of "Mr. Photographer." I captured many moments in my pocket camera. I thought that these pictures might be needed one day. It is a big event when big names in journalism gathered, talking about their works, having lunch while discussing the so-called war on terrorism etc. 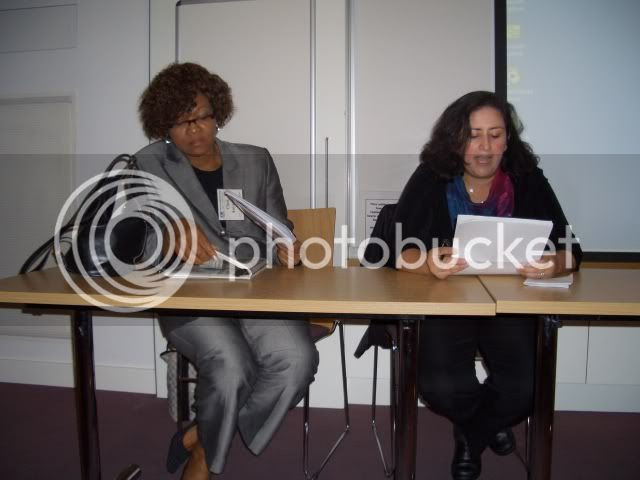 Christine Anyanwu of The Sunday Magazine in Nigeria and Maria Cristina Cabalerro, who currently studies at Harvard, talked about investigative reporting in the Third World. Anyanwu talked about financial and human resource difficulties in countries like Nigeria. Cabalerro presented a paper in this workshop on how to develop investigative reporting in countries like her Columbia. 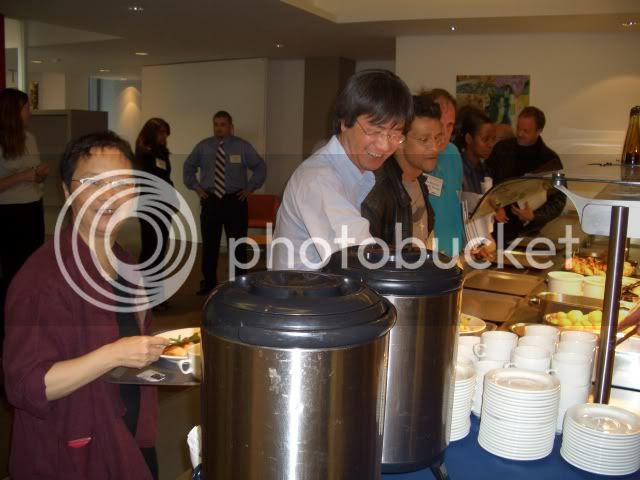 During a lunch break at a canteen. Ying Chan (left) and Steven Gan (white shirt) took turn to fill their plates. Ying Chan currently teaches journalism at Hong Kong University. Gan is a co-founder of Malaysiakini.com in Kuala Lumpur. 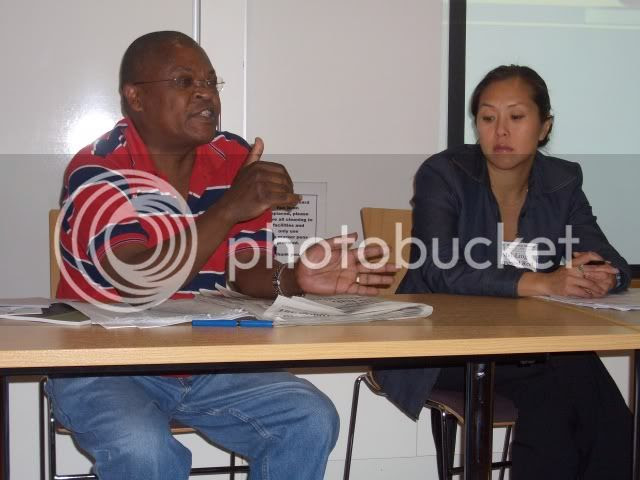 Mutegi Njau of The Nation newspaper in Nairobi shared a panel with Mei-Ling Hopgood of Argentina. Mei-Ling used to work on the investigation of the Peace Corps when she was working for the Dayton Daily News. She won an ICIJ award for her investigation. Njau was invited to speak on white-collar crime and corruption in Kenya at a 1994 U.N. conference on crime in Cairo, Egypt. In 1992, Njau worked at The Charlotte Observer while on an Alfred Friendly Press Fellowship. 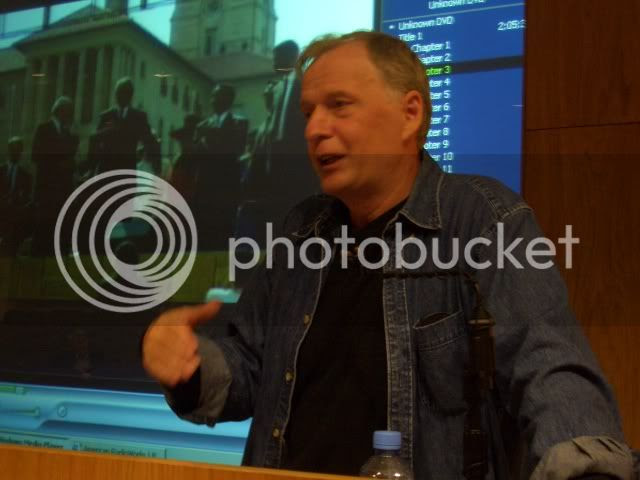 Bill Marsden is an editor for The Gazette, Montreal's English-language daily. Marsden edited the International Consortium of Investagative Journalists' The Water Waron project. He also assisted in the production of "Dead in the Water," a two-hour documentary which was largely based on the investigations into water privatization. 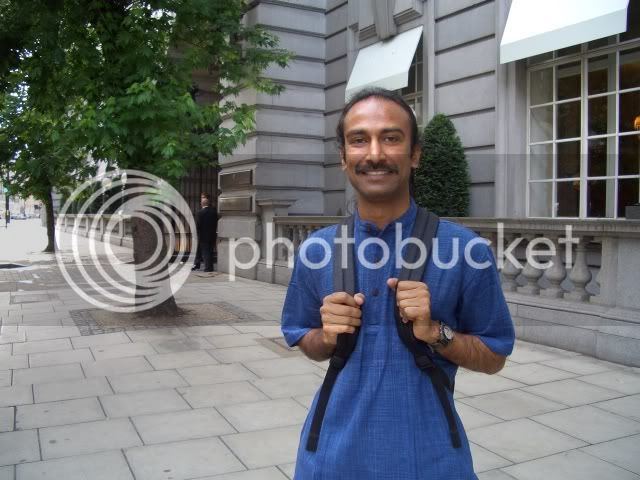 Rakesh Kalshian is currently working in Katmandu with the Panos Institute. Rakesh comes from New Delhi. He was my classmate when we both got the 1999-2000 Nieman fellow at Harvard University. He is standing outside our Chancery Court Hotel, near the Holborn train station in London. It is a five-star hotel. Phillip Knightley of London even called it a "butique hotel." 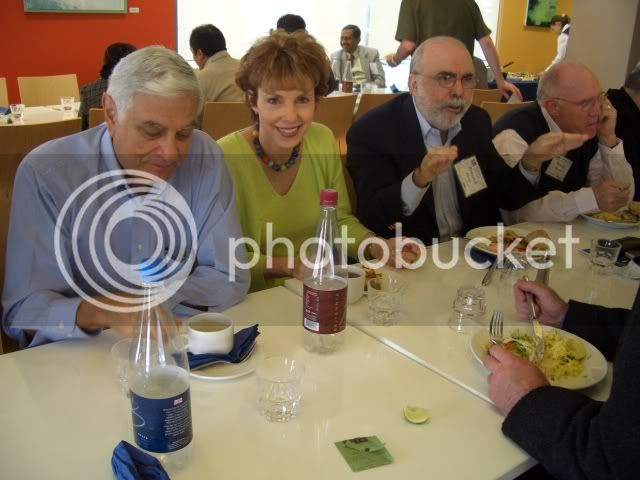 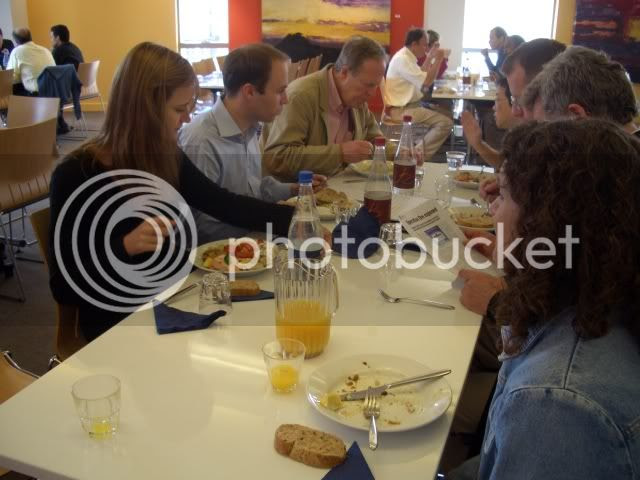 Lunch time is always an opportunity to talk more with old and new friends. City University students also joined our lunches, discussing journalism issues or chatting with their colleagues. The students also come from many countries. Some helped organize the conference. 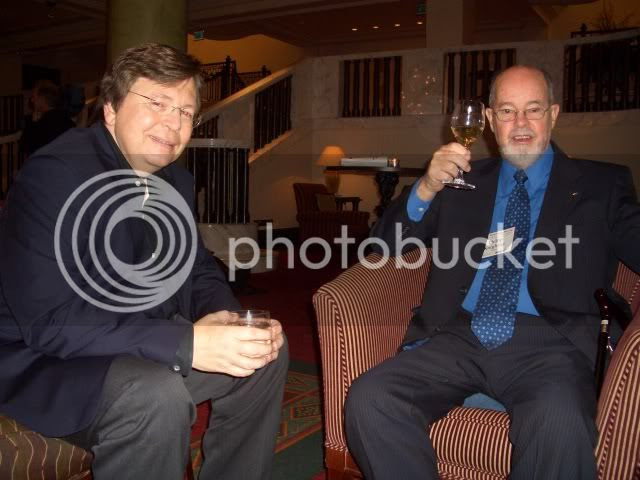 Charles Lewis, the founding director of the Center for Public Integrity, shared a light moment with Phillip Knightley while waiting for the ICIJ Dinner to proceed on Saturday evening. Knightley is the writer of The First Casualty: The War Correspondent as Hero & Myth-Maker from the Crimea to Iraq. 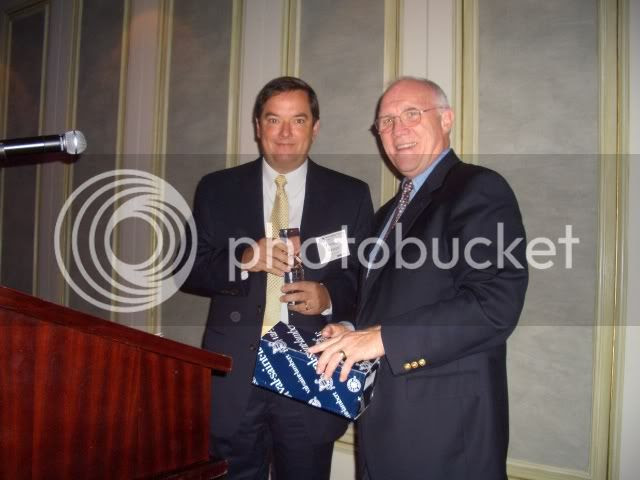 Wendell Rawls awarded the 2002 ICIJ Award for Outstanding International Investigative Reporting to Thomas Maier of Newsday. Maier worked stories on the plight of America's immigrant workers. In his five-part series, "Death on the Job: Immigrants at Risk," Maier exposed the extent of health and safety abuses suffered by immigrants in American workplaces and documented the immigrants' often fatal quest for a better life. Between 1994 and 1999, 4,200 immigrant workers died in workplace-related incidents in the United States, more than 500 of them in the state of New York.

Rawls also handed over to Mei-Ling Hopgood the 2004 ICIJ Award along with her colleague Russel Carollo of the Dayton Daily News. In this seven-part series, "Casualties of Peace," Carollo and Hopgood examine problems in what is often looked upon as an almost sacred institution, the Peace Corps. Their investigation reveals the widespread violence directed at Peace Corps volunteers, who since 1962 have died at a rate of about one every other month. 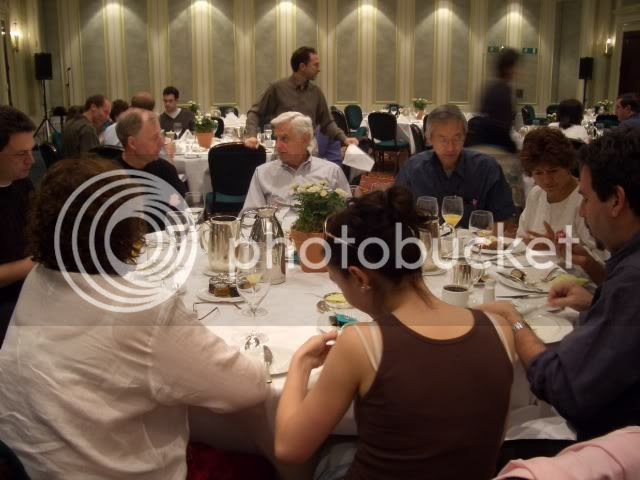 Sunday brunch at the Chancery Court Hotel. We gathered at the dining hall of the hotel, having autentic English breakfast. 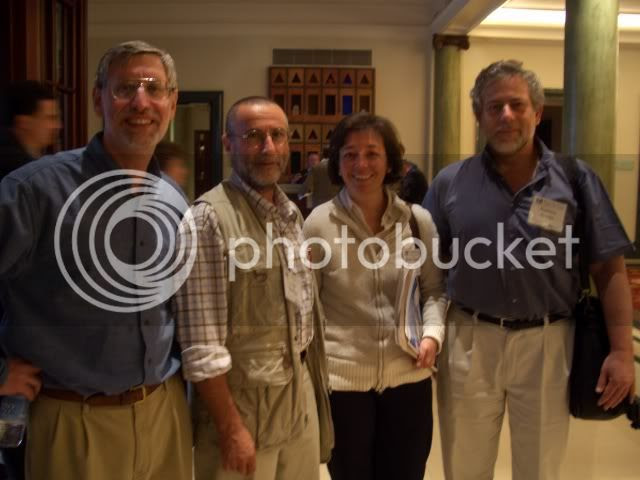 Sunday afternoon, many participants prepared themselves to leave London. We met at the hotel lobby to say good bye. David Kaplan of the US News & the World weekly magazine (left to right), Yossi Melman of Tel Aviv's Ha'aretz daily, Maria Teresa Ronderos of Bogota's Semana magazine and Gustavo Gorriti chatted for a while at the lobby. Gorriti now returns to his homeland Peru after living for a while in Panama and the United States to avoid difficulties with Peru President Alberto Fujimori. 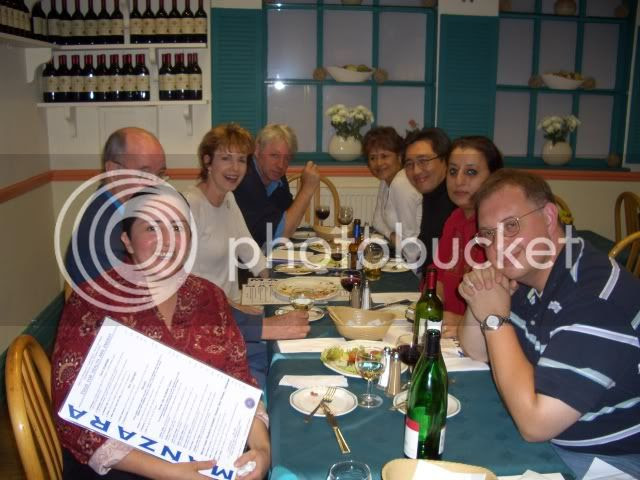 Phillip Knightley (second left) held a birthday party in a Turkish restaurant for two of us, Ritu Sarin of New Delhi (red shirt on the right) and me. Ritu and I happened to have our birthday on Aug. 7. Leonarda Reyes of San Miguel de Allende helped organize this small gathering as most participants have already left London. Reyes used to manage TV Azteca in Mexico. Good food! Good conversation!
Posted by andreasharsono at 2:32 AM