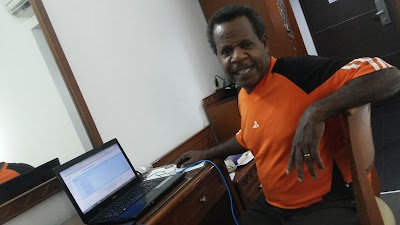 Theo Hesegem of Wamena is a Papuan human rights campaigner who helped the Indonesian government to resolve past human rights abuses in the area.

The detention of more than 1,500 Papuan independence supporters on May 2 for “lacking a permit to hold a rally” speaks volumes of the government’s stubbornly problematic approach to dealing with dissent in the restive territory of Papua. This approach has for decades provided impunity for security forces, despite their abuses against Papuans and turned dozens of those exercising their universal rights to freedom of expression and association into political prisoners.

President Joko “Jokowi” Widodo has promised Papuans a change, beginning with “an open dialogue for a better Papua”. But aside from the release of a few political prisoners, there has been barely any signs of meaningful change on the ground in Papua.

Jokowi’s December 2014 pledge to thoroughly investigate and punish security forces implicated in the death of five peaceful protesters in the Papuan town of Enarotali that month has remained unfulfilled. And the Indonesian bureaucracy continues to obstruct international media from freely reporting in Papua despite the President’s May 2015 declaration to lift the decades-old restrictions.

Last month the government announced a new approach to Papua’s long history of serious rights abuses and lack of accountability: It was going to try to resolve them.

On April 20 chief security minister Luhut Pandjaitan opened a one-week meeting in Jakarta, which was attended by more than 20 human rights activists and ethnic Papuan officials from Papua and West Papua, along with officials from the National Police, the Attorney General’s Office (AGO) and various ministries.

The meeting followed increasing international scrutiny of Indonesia’s human rights record in Papua, including a September 2015 proposal by the Pacific Islands Forum, a political grouping of 16 Pacific nation states, for a possible human rights “fact finding mission” in Papua.

The meeting aimed to develop a roadmap to investigation and resolution of a number of the region’s most serious human rights abuses. The initiative was a follow-up to Jokowi’s commitment in December 2014 to seek an end to human rights violations in Papua.

The government has compiled a 17-page report detailing 11 high-priority human rights cases in Papua that it aims to solve. They include the Biak massacre in July 1998, when security forces opened fire on participants of a peaceful flag-raising ceremony on the island, the military crackdown on Papuans in Wasior in 2001 and Wamena in 2003 that left dozens killed and thousands displaced and the forced disbandment of the Papuan People’s Congress in October 2011 that left three people dead and hundreds injured.

The government has also prioritized individual cases such as the disappearance of Aristoteles Masoka, the driver of murdered Papuan leader Theys Eluay in November 2001. Although Eluay’s body was found inside his car, and seven Army Special Forces soldiers were convicted in 2003 for the murder, Masoka has never turned up.

The list is an encouraging sign that the government recognizes the role of the security forces in human rights abuses in Papua and the need for accountability. However, mass killings that took place between the 1960s and 1970s, including a military operation in 1977-1978 against Free Papua Movement (OPM) insurgents that allegedly involved indiscriminate aerial bombings and strafing, have been deliberately omitted.

Papuan activists have also called for investigations into the killing of anthropologist-cum-musician Arnold Ap in April 1984 and rights abuses linked to the Indonesian security forces in the lead-up to the July 1969 UN-sponsored referendum that resulted in a much-contested unanimous vote for continued integration with Indonesia.

The government’s plan to resolve these cases involves deploying agencies including the National Police, the AGO, the National Commission on Human Rights (Komnas HAM) and the military police to investigate. The plan specifies the need for compensation for survivors and victims’ families for incidents in which the evidence clearly indicates the culpability of government officials and security forces.

Insp. Gen. Paulus Waterpauw, the Papua Police chief, has promised to prosecute individuals implicated in those abuses. The government has yet to publicly disclose a timeline for these investigations.

Papua’s troubled history and ongoing serious human rights abuses demand a meaningful government response to both address the crimes of the past and to enact measures to prevent future abuses. The ongoing low-level conflict with the small and disorganized OPM obligates the government to ensure security for the population.

Security forces repeatedly fail to distinguish between violent acts and peaceful expression of political views. The government has denounced flag-raisings and other peaceful expressions of pro-independence sentiment in Papua as treasonous. Heavy-handed responses to peaceful activities have resulted in numerous human rights violations.

In the past eight years, Human Rights Watch has documented dozens of cases in which police, military, intelligence officers, and prison guards have used unnecessary or excessive force when dealing with Papuans exercising their rights to peaceful assembly and association.

The government also frequently arrests and prosecutes Papuan protesters for peacefully advocating independence or other political change. More than 35 Papuan activists are in prison on treason charges.

The writer is a researcher for the Human Rights Watch.
Posted by andreasharsono at 4:49 AM