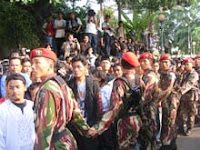 The military and the media skirt Suharto’s home after his death in Jakarta. Photo: Dylan Quinnell


Indonesia’s former President Suharto has died of multiple organ failure, unleashing a flurry of media coverage and post mortems about his life.

The 86-year-old politician had been admitted to Pataminia Hospital on January 4 and finally lost his battle with old age after years of remarkable recoveries - this being his 12th critical visit to hospital since 1999.

Suharto leaves behind a nation – the world’s most populous Muslim country - and its people deeply divided over whether he was a national hero or one of Indonesia’s most insidious crooks.

Critics regarded Suharto as corrupt, accusing him of embezzling between US $15 to $35 billion from the state, and towards the end of his reign he was condemned as nepotistic, giving positions of influence to his family members.

But during his 32-year rule the vast archipelago experienced unprecedented economic growth and poverty plummeted.

“In the 1980s and early 1990s, the economy was booming and people had food on the table, jobs, and were able to send their kids to school,” says Endy Bayuni, editor of the English-language Jakarta Post, one of Indonesia's most influential newspapers.
.
“They remember good years and complain democracy is not delivering."

It is this economic prosperity that has many remembering Suharto with rose-tinted glasses.

“As this old man passes away we must try to make it more solemn and remember what he did for his country,” argues 80-year-old Djafar Assegaff, news director of Metro TV.

“To accuse him of corruption and put him in jail would not solve the problems of Indonesia.”

Assegaff’s view is not unique with Metro TV. Many others use the honorific Pak Harto – “Father Harto” - for the autocratic leader.

To many, Suharto is regarded as the father of the nation.

“He was in power for 32 years so there's a whole generation with no knowledge of life without him,” says Louise Williams, who was the Sydney Morning Herald’s Jakarta correspondent in the years leading up to the toppling of Suharto.

"It's bit like having an authoritarian father, you resent him but feel lonely when he’s away."

However, there are many who have a very different view, a split that can often be defined by age.

“The young only know him as corrupt, and the poor hate him for stealing money that they think could have been used for them," says Bayuni.

Another that knows the darker side of Suharto’s legacy is Andreas Harsono, a well known local journalist who has covered the major stories in Indonesia for more than three decades.

“Suharto is a monster - quote me on that!

“Under his rule, electric cords were attached to people’s genitals by the security forces - people from Aceh, Papua and East Timor,” says a still bitter Harsono.

There were “almost four million killed ‘for Indonesia’ under his rule, mainly communists, but also separatists,” mostly in the mass killings of 1965-1966.

The greatest sadness that Harsono feels for the death of the old leader is that gone too are chances of uncovering his alleged involvement in the killings.

Suharto’s corruption was so pervasive that many who are now in power owe their start to him, many of whom are now toting forgiveness as a virtue and time as a healer.

Harsono, however, finds this offensive. “People are calling for him to be forgiven, but let’s look at what he did.

“He killed a lot of people and stole a lot of money.

“So, who has the right to forgive him?

“Only people who had their loved ones killed or their money stolen, it’s not fair! Where are the communists, where are the Papuans?”

Whatever their view, this is a big issue for Indonesians – the air can now be cleared.

Wherever there were TV sets, there was also a huddle of people, some quietly grieving and others - especially students - happy at the end of the corrupt dictator.

There will now be seven days of condolences, flags flying at half mast, with a big funeral planned for today.

Dylan Quinnell is a graduating Bachelor of Communication Studies (Journalism) student at AUT University on the ACICIS professional journalism practicum in Jakarta. He is on internship in Jakarta with his colleagues Aroha Treacher (AUT) and Will Robertson (Massey). They are sponsored by the Asia: NZ Foundation and the Pacific Media Centre.
Posted by andreasharsono at 8:41 AM