For opponents, Suharto's death does not dull anger 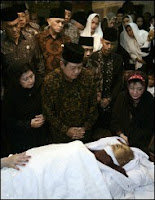 JAKARTA, Jan 27, 2008 (AFP) - The death Sunday of Indonesia's autocratic former president Suharto has not dulled the anger of his political opponents, who see his demise as a missed opportunity to bring him to justice.

For them, including many who were thrown into prison for dissent, time has failed to heal the wounds of Suharto's three decades of repressive rule.

"His death is a tragedy for all the victims of his crimes, they will never get justice," said Budiman Sudjatmiko, who was jailed as a student under the Suharto regime and now works for the People's Democratic Party of Struggle.

The 86-year-old former president, who stepped down in 1998, was accused of many crimes -- among them, the mass killing of over half a million suspected communists in 1965-66.

He and his family also left a legacy of massive corruption, bleeding up to 35 billion dollars out of the Indonesian economy, according to the anti-graft watchdog Transparency International.

As head of the army's Kostrad elite forces, Suharto led a campaign against the then-powerful Indonesian Communist Party (PKI) and suspected sympathisers shortly after a failed 1965 coup attempt blamed on communists.

The ensuing violence across the country is acknowledged --mostly outside Indonesia -- as one of the worst mass killings of the 20th century.

"This is the mother of all crimes against humanity. Suharto was never held accountable, he was even praised as a hero," Sudjatmiko said.

"Count in his corruption then he is a perfect criminal -- he can be put up there with Pol Pot and Hitler."

Sudjatmiko lamented Suharto's passing as a second lost opportunity, saying he could also have been brought to trial in the reform era that followed his resignation in 1998.

Carmel Budiardjo, the British-based founder of Tapol, an organisation which advocates human rights in Indonesia, described Suharto's demise as "the death of a tyrant."

But, she added, "there are people who will feel like I feel, that he died without facing justice. I only hope the obituaries will highlight what he did during his reign."

Budiardjo, a British citizen, said she was locked up for three years from 1968 in a women's prison in Bukit Duri, Jakarta, because of her connection to an academic discussion group.

Under Suharto, intellectuals were frequently jailed after being accused of links to the PKI.

Fadjroel Rachman, who heads a non-governmental organisation called Suharto Inc. Busters that worked to bring him to trial for graft, followed up his own expressions of condolences to Suharto's family with a call that "legal action against his cronies, families and loyalists should continue."

Rachman, who was jailed for defamation as a student during Suharto's rule, cited the 1975 invasion of East Timor and military crimes during the bloody separatist war in Aceh province as abuses for which victims of his regime are still seeking justice.

Investigative journalist and activist Andreas Harsono vividly remembers as a teenager watching the president's military police shoot a young boy in the street in a bid to reduce petty crime.

Harsono said as a journalist he experienced first hand the suppression of the media by Suharto's regime.

"In the future people will praise him, people will call him the 'father of development', people will deny that he was even involved in fascist activities, in killings and suppressing our freedoms,because he has never been tried," Harsono said.

Photo caption
President Susilo Bambang Yudhoyono and First Lady Kristiani paid their respect to Suharto on Cendana Street, Jakarta. Yudhoyono and Vice President Jusuf Kalla arrived in the residence with their ministers and other assistants in a convoy of 32 limousines, land rovers and buses. Photo by Abror Riski of the Merdeka Presidential Palace.
Posted by andreasharsono at 6:20 PM