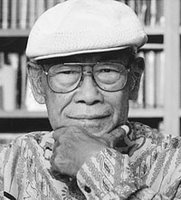 Just like most student activists in the 1980s, I began to read Pramoedya Ananta Toer through an underground network. The Indonesian military had virtually banned most of Pram's books at the time. They arrested three students for selling Pram's The Buru Quartet in Yogyakarta. They also arrested some students for inviting Pramoedya just to talk at a Jakarta campus.
The repression put much pressure on our student activities. But obviously, it didn't stop distribution or the clandestine discussions. We saw Pram as a sympathizer of the downtrodden and an unwavering critic of Indonesia's ruling elite. To keep Pram's books on our shelves meant to resist. Slowly, Pram became our hero.
In the 1990s, I began to work as a reporter myself, meeting Pram personally and learning more about his resistance when jailed on Buru Island. I sometimes interviewed him. But writing in a repressive environment, where self-censorship was common among Jakarta's mainstream media, did not help much to communicate his thoughts to my audience.
In 1998, the then-president, General Soeharto, was forced to step down from power. Pram began to have more freedom to talk about what was on his mind. He talked about the two million people killed by the Soeharto regime in the 1960s. He blasted Soeharto. He defended his idol President Sukarno, arguing that Indonesia's revolution should be continued.

A nation of coolies, he once said about present-day Indonesia; first enslaved under the Dutch, and then under the feudal Javanese elite who assumed the reigns of power after independence.
Javanism or Java fascism, he insisted, keeps the country enslaved. Javanism is to be loyal and obedient toward your bosses. Under Javanism, Indonesia has no rule of law, justice or truth.
"Indonesia, you know, is a victim of fascism."
Last month, I went to his house, a big, six-story white building with blue pillars and a swimming pool in the Bojong Gede area of South Jakarta. Pram repeatedly told me that the military had seized his 1965 house, but he proved that he could build another house.
"It is even bigger than the old one," he giggled. "For me, to resist is just to keep writing. I proved it that I could overcome my enemies by my writings."

I went there for another interview. This time, I challenged his passion about the dream of Indonesia. I told him that over the last four years, I had traveled into the jungles of Aceh and Papua. I had met Acehnese guerrillas and Papuan freedom fighters; I had gone to see Alifuru leaders in Maluku; I visited remote islands like Miangas in the Talaud islands or Ndana Island near Australia. I learned that the dream of Indonesia had been corroded. Hasan di Tiro of Aceh simply said that "Indonesia" is the pseudonym of bangsa Jawa, or "Javanese nation". Indonesia was imagined and created to serve the densely populated Java Island.
The Papuans felt they were being exploited by Jakarta's imperialism. The Papuans were made to be dirt poor. In Ambon, Semuel Waileruny said the people of Maluku had suffered tremendously under the "Javanization" program.
More than 6,500 Madurese were slaughtered in Kalimantan due to ethnic rivalries between the pro-Jakarta Malay and the more independent Dayak tribal groups. Poverty is still a big problem in many places in Indonesia. Corruption is another. Sixty 60 years after it gained independence, Indonesia seems to be a failed state.
"How can you still believe in your dream of Indonesia?" I asked Pram. Pram listened to my shouting into his right ear. He still smoked his kretek (clove cigarettes) and sipped his dark coffee. But he nodded and took a deep breath.
"The only thing that unites Indonesia is Bahasa Indonesia. That is the source," he answered. "Papuans also speak Bahasa Indonesia, not Papuan languages." He said he himself was detained for 14 years which included 10 years of forced labor on Buru island. "If you go to Buru and you see mango trees, then that is my good deed. I found a mango seed on a river with a German book. I planted that seed," he digressed.

"Once there were some friends who came here from Aceh. I apologized for facts like this (murder). I apologized. I reject the idea of breaking up Indonesia. It will create continuous wars. Java is the source of murderers. For more than 100 years, Java sent murderers to Aceh, since the Dutch period until today." "
I apologized to my Acehnese friends," he said. "Aceh has individual courage. Other people (in Indonesia) only dare to fight in groups. But the Acehnese fight continuously against the Dutch, the Japanese and now the Javanese."
"If Indonesia was to break up, wars will happen continuously. Java has too many people and they are mostly poor."
Pram told me he did not believe Indonesia could solve the Aceh problem, even with the latest Helsinki agreement. He saw that the mind-set among the ruling elite hasn't changed: They saw Indonesia more as a territorial matter than a nation-building process.
"Indonesia is the product of young people. Its peak was the Youth Pledge in 1928. It was the beginning of this country. The history of Indonesia is the history of young people. It is not understood by Indonesian leaders after Sukarno."
Well, I asked him again, if Java continues to send murderers to Aceh, Papua, Maluku and other places, but Indonesia should remain united, does he mean that the more than 200 million people living in Indonesia should accept their misery? It's been 60 years, but killing in the name of Indonesia still takes place.
Indonesia kills almost as many of its citizens as Germany did under Adolf Hitler (six million victims) or the Soviet Union under Joseph Stalin (five million). Pram remained quiet, sucking on his kretek again and then excusing himself to the toilet.  "My problem is this," he giggled, pointing to his trousers.

It had already been two hours and I decided to stop the interview. I knew he needed to take a break. He came out to meet me again, walking me to his terrace and his beautiful garden. My cameraman colleagues asked him to sit here and there. Finally, we said goodbye.
e promised me he would continue the interview. I said next week. But next week never came. Pram succumbed to his long illness once again and decided to meet his fate last week. S
Selamat tinggal Bung Pram. Kami akan teruskan jejak langkahmu. (Farewell, Brother Pram. We will continue in your footsteps.)
Andreas Harsono is the head of the Pantau media group, interviewing Pramoedya for his upcoming book "From Sabang to Merauke: Debunking the Myth of Indonesian Nationalism."
The Jakarta Post, Sunday, May 7, 2006
Posted by andreasharsono at 1:01 PM