We celebrated Norman's birthday in his school this Wednesday. I bought a chocolate cake at the nearby Sheraton Media Hotel and brought it to the school. I talked with his classmates while waiting for Norman to finish another session outside his classroom.

Zarine suggested that they were to hide under their desks while waiting for Norman to come in. They did it quietly. The whole class, including Ms. Neelam, their teacher, hid under their respective desks. Sshhhh. Norman was confused when entering his classroom. It was so quiet.

"Happy birthday Norman!" we shouted and yelled. He smirked and looked confused. Then everyone sang "Happy Birthday."

The birthday boy smiled and shook hands with his teacher and friends. He gave me a big huge. He blew a candle (numbered nine indeed), playing games, posing for pictures and sharing lunch of fried noodle, fruit juice, cookies and cakes. 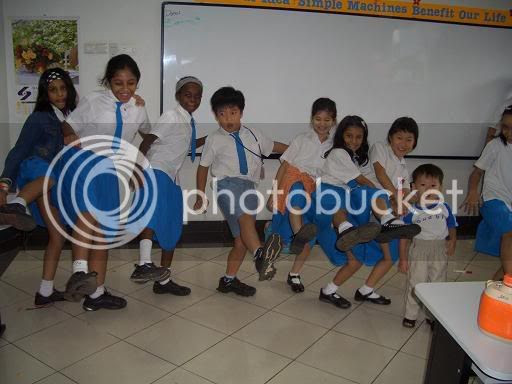 The girls initially decided to pose rocket-styled in their class. Only girls. But Norman later joined them right in the middle. They include (from left to right) Aakriti, Zarine, Maab, Norman, Sonia, Divya and Lee Hyen Ju. Cho Yong Gie, Norman's little cousin, also joined this line up. His mother, Heylen Prisca Harsono, helped me to prepare the meals and embroidered hand towels as gifts. 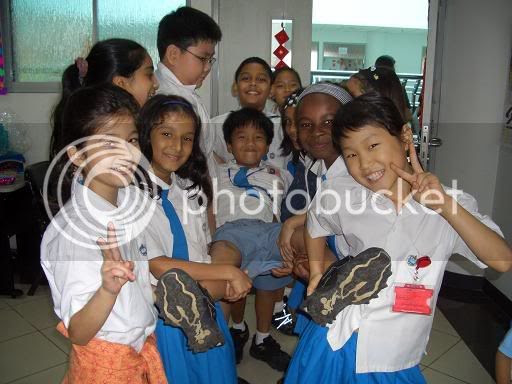 Later Norman's classmates grabbed him, holding him together for a picture. I was a little bit worried that they are not strong enough to hold Norman. Well, it was groundless indeed as they were so many. They showed the "V" sign (from left to right) Sonia, Divya, Megha, Arif, Nishad, Levana, Aakriti, Maab and Lee.

Norman studies in an international school. I am not sure how many nationalities his classroom has. His teacher is an Indian. Lee is obviously a Korean. Maab is a new student who speaks Arabic better than English. 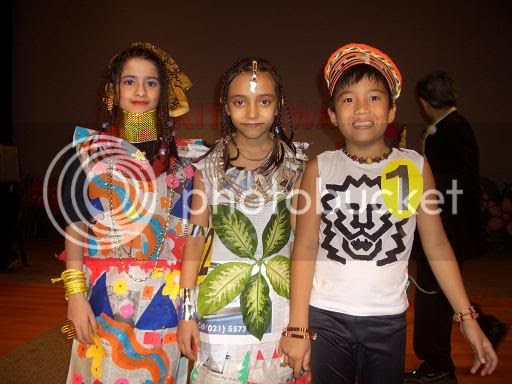 On Thursday, Norman joined a Kitten Walk contest at his school in Kemayoran. Three of his classmates also joined the walk, wearing "African Civilization" clothing. He posed with Akshika too (middle). 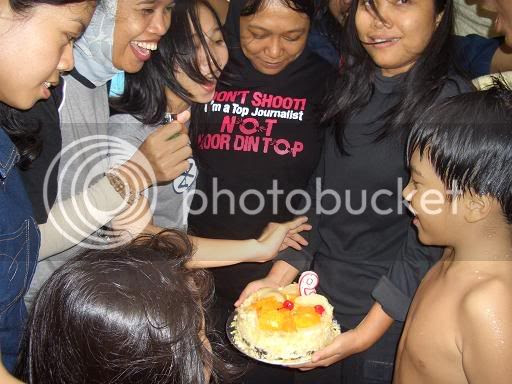 On Saturday, my colleagues at Pantau Foundation came to our apartment, gathering for another birthday party. Norman blew his second cake by the swimming pool. It was an informal small gathering. We actually used this opportunity to have our own gathering. 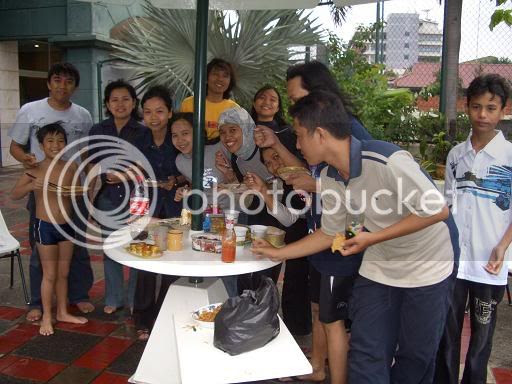 We shared fried noodles, ice cream, soda, fried tempe, the Chinese kue ranjang (due to the Chinese New Year), starting from 4 pm till 11 pm with some friends decided to watch a video movie together. Norman was so enthusiastic this Saturday with his new toys. 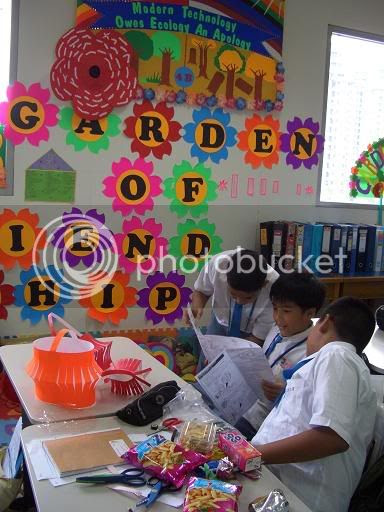 This year, my present for Norman is a Hot Wheel track, a popular toy among boys his age. He dreamed about this Swamp Beast track since months ago. He shared the instruction manual with his buddies, Nishad and Ryan, who have also their Hot Wheel items.
Posted by andreasharsono at 6:26 AM