ICFJ Representative David Case and IAIN Rector Yusny Saby opened the discussion at 9:10 am. Case said that the ICFJ proposal is still an idea. It still has no funding yet. Yusny said an offer like this comes only once in a lifetime, “We could work together to raise the funding.”

The paper’s Indonesian translation was three days earlier made available in the participant’s invitation but also once again in the meeting room. Each one got a folder with a note, a ballpoint and the paper. Later books on the IAIN curriculum as well as a Pantau book on literary journalism were also distributed.

Yusri of IAIN divided the participants into three different groups. Each group has between eight to 10 people. They moved into their respective circles. Zainuddin T., Andreas Harsono and Sjamsul Kahar led the discussion groups. The discussion took place until 11:30 and the groups took a photo op, a lunch break and the Friday prayer.

Many were also involved in informal talks. Yusny and Sjamsul talked with Case. Most men went out to a nearby mosque. The second session began again at 1:30 pm and ended at 3:00 pm although some people stayed on with informal talks. Muhammad Saleh of Modus weekly talked about politics with the lecturers. Each group sent a speaker to present their results in the forum. It was quite rich.

They basically welcomed the proposal, expecting the ICFJ to help raise funds, send Knight Fellows, develop curriculum etc. Some remarks were also quite critical toward how Jakarta handles the so-called “national curriculum.” IAIN could only handles 60 percent of 145 credits a student should take. The 40 percent should be “national curriculum” courses.

The forum decided to hold a smaller meeting later in the evening to summarize the groups’ presentations. It is needed to set the priorities. Case said it is important to work first, showing donor agencies that we could develop IAIN journalism school without waiting for the big funding.

Later in the evening, Yusri, Nani, Hotli, Saleh, Radzie, Linda, Case, Jufridar and Andreas gathered at Pantau office in downtown Banda. These are the responses and priorities:

1. IAIN is going to change its school name from the “Dakwah Faculty” to the “Dakwah and Communication Faculty”

2. While waiting for Knight Fellows to visit and to help teach, the group will start employing Aceh journalists to be “extraordinary lecturers” (dosen luar biasa) to teach classes. The problem is IAIN could only pay Rp 8,000 (80 cents) per visitation. “It is even not enough to pay for the gasoline,” said Saleh.

Yusri said it is a national standard. IAIN could not change that standard. Andreas compares with Jakarta’s Universitas Pelita Harapan, once offered him to teach, that pays Rp 400,000 ($40) per visitation. The group realizes IAIN should be sustainable. It should not pay a Jakarta price. They decided to set the platform at Rp 100,000 ($10).

3. David Case will help establish the editorial board of the inactive Ar Raniry Post newspaper. Case and Yusri will organize a student journalist’s workshop in Sabang next week. They will use the occasion to select Ar Raniry Post staffers. The budget to print the newspaper is available. Other student outlets, including the student radio, should be handled separately. The radio has a transmission problem (too powerful for a community radio).

4. Curriculum will also be changed. They would like to hear from Peter du Toit, a South African journalism lecturer, who will come to Aceh to have a workshop next month. It is needed to compare notes. Andreas also mentioned Janet Steele, a George Washington University professor, who is now a Fulbright scholar in Jakarta. She might be interested to help IAIN.

6. Internship program could be done Banda Aceh, Jakarta and Kuala Lumpur. Aceh editors, who were present in the forum, welcome IAIN students to work in their newsrooms. They will also provide some pocket allowances. They included Serambi, Modus (5 slots), Ceureumen (6 slots), Acehkita (2-3) and Aceh magazine.

Andreas said Pantau Foundation might help to seek the internship in Jakarta newsrooms. He will also try to approach Kuala Lumpur editors. Andreas used to work for The Star daily in KL. But IAIN should first train the students who will seek internship –at least when the formal course are not fully developed yet. Yusri agrees. Case will also help. The Malaysian internship needs journalists who master English.

7. Re the media annual awards, IAIN will select a committee, which includes journalists, to set up the criteria and to give a recommendation to IAIN. The forum welcomes this idea, believing that it will help improve journalism in Aceh. 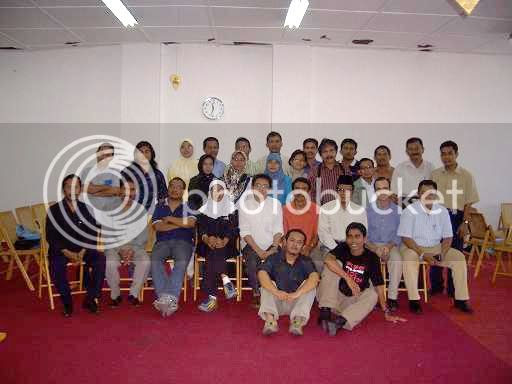 Posted by andreasharsono at 6:19 AM