Indonesian Muslims Get an Earful From Sudanese Scholar

JAKARTA -– A leading Muslim scholar from the Sudan has injected some high-octane political thinking into the furious debate going on here over the possible imposition of Islamic law, or sharia, saying that the concept is incompatible with democracy and the principles of modern statehood. 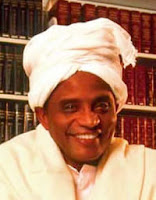 Dr. Abdullahi Ahmed An-Na'im, who now teaches in Atlanta, said in his public lectures here that Indonesian scholars should learn more about sharia and do comparative studies on other Islamic countries where it was officially implemented, such as Saudi Arabia, Afghanistan, Iran, and countries where sharia had been being campaigned and partly imposed, such as Sudan, Algeria, Nigeria, Jordan, Iraq, and Lebanon. None of them is democratic.

"Most advocates of the sharia do not know its content. But they made others hostage to their sharia campaigns. It's you who have to learn the content and speak out, be straightforward," An-Na'im told a workshop of Muslim scholars on Friday.

Indonesia is host to the largest Muslim population in a single country in the world. An-Na'im's speeches are intellectually relevant here, where sharia is one of the most important ongoing public debates in post-Suharto Indonesia. During former President Suharto's 32-year authoritarian rule, any debate on whether Indonesia should change its secular state ideology either toward Islam or socialism, was swiftly repressed.

After Suharto was forced to step down in 1998, Indonesia immediately began a promising but very difficult process of restoring democracy.

Advocates of sharia also turned up, ranging from political parties that choose legal and democratic ways to promote their ideas to the Islamic militants, such as Laskar Jihad, Islam Defenders Front, Indonesian Mujahidin Council, and Jamaah Islamiyah, that advocate violence to achieve their goals. More than a dozen of these militants were involved in the Bali bombing last October that killed 192 people.

An-Na'im came to Indonesia earlier this month at the invitation of the State University for Islamic Studies in Jakarta, one of the largest state-financed universities in Indonesia. He gave lectures in crowded theaters and classrooms both within and outside the university grounds, and granted media interviews over a two-weeks period.

"It's incredible. An-Na'im gave incredible input to not only the modernist Muslims, but also our colleagues from Hizbut Tahrir whose [sharia] arguments were proven to be weak," said Nong Darol Mahmada of the Liberal Islam Network.

Hizbut Tahrir is a Middle East-based political organization. Its Indonesian branch advocates sharia through public rallies and campaign. They argued that the Indonesian government should run the economy according to Islamic principles. Their well-known slogan is "sharia is the answer."

Reared in a Sudanese village down the Nile River from Khartoum, Dr. An-Na'im earned law degrees from the University of Khartoum, Cambridge and Edinburgh University, and is currently a professor of law at Emory University in Atlanta. He is the author of Toward an Islamic Reformation: Civil Liberties, Human Rights and International Law (Syracuse University Press, 1990).

He began his involvement with sharia in the 1970s, when he joined a reformist movement in Sudan. The Republican Brothers fought for the country's political independence from Britain (which Sudan achieved in 1956) and then became a social movement calling for reform of Islam.

In 1983, 50 members of the Republican Brothers, including An-Na'im, were imprisoned. He remained in jail for 18 months. Soon after he and the others were released in 1985, their leader, Mahmoud Muhammad Taha, was executed. "The trial was only one hour," An-Na'im said. Three months later An-Na'im left Sudan. He has not returned to Sudan since that time due to the potential for persecution against him.

Ismail Yusanto of the Hizbut Tahrir Indonesia, who attended a workshop organized by Mahmada's organization, argued openly with An-Na'im, saying that sharia provides jurisprudence as an alternative to capitalism. Yusanto said the gold-based Saudi "dinar" currency might replace the current money system, adding that dinar is free from depreciation, unlike the system which lead to the Asian economic meltdown five years ago.

Hizbut Tahrir also advocates the establishment of a "khilafah Islamiyah" –a global Islamic state composed of all the Muslims in the world. Yusanto said the recent establishment of the European Union, where the currency is united and the borders are opened, should illustrate that in the future European states are going to be even more closely united. Why not Muslims? Why can't Indonesians, for instance, go to Malaysia freely?

An-Na'im responded by saying, "What is Islamic about the dinar?" He told Yusanto that the dinar was adopted in the Middle East from the Roman Empire. Human history has shown that valuable minerals had been used to accommodate trading among people long before the Roman Empire. Gold was used to back world currencies until the end the World War II.

He said many sharia advocates have a romantic feeling about the glorious days of the Prophet Mohamad as well as the other Islamic sultanates. The long history of Islam, however, showed that not a single Islamic state has ever imposed sharia in the way modern sharia advocates propose, which is to equate faithfulness to God with observance of public order.

An-Na'im repeatedly said that secularism is a part of Islam's history. No pre-colonial Islamic state ever imposed rules that equated submission to God to submission to public order. But he admitted that secularism is seen negatively in many parts of the Islamic world due to the ties of secular Islamic states with dominant post-colonial powers like France, Britain or America.

His speeches, generously peppered with Arabic proverbs, also used many classical interpretations of the Koran to buttress his arguments, fascinating both opponents and friends with his vast knowledge of Islam.

The Indonesian debate over sharia actually began in the 1940s. In the months preceding Indonesia's independence on Aug. 17, 1945, Indonesian leaders worked to formulate a constitution for the planned republic. The most debated issue was whether the state should impose different rights and duties on citizens according to their religion.

Muslim leaders drew up a draft wherein the state would be based on belief in God with "the obligation to carry out the sharia for the followers of Islam."

This draft, also known as Jakarta Charter, was rejected by the secularists and the non-Muslims, which led to its exclusion from the Constitution. For the Islamists, the failure became a painful reminder of other Muslim defeat.

President Sukarno, himself a nationalist-secularist, was elected Indonesia's first president. He also did not tolerate the sharia campaign during his rule. Suharto replaced Sukarno in a bloody coup in 1965. Suharto also propounded Indonesia's own secularist ideology, Pancasila.

Interestingly, during the post-Suharto period, the Nahdlatul Ulama and the Muhammadiyah, the two largest Muslim organizations in Indonesia, which used to campaign for the adoption of sharia in the 1940s and 1950s, now openly opposed its advocates. Their current leaders say Islam fights for universal values and thus sharia need not to be imposed as it was in the Mecca and Medina of the 8th Century.

An-Na'im called on his audience, who seemed to largely agree with him, to be straightforward in challenging sharia advocates. He demonstrtaed his point by confronting, case by per case, every question posed by the sharia advocates who came to his lectures.

"How will you deal with the Christians? Although their number is only several percent of the population in Indonesia, but that means millions. Please be serious. You're dealing with people's lives," An-Na'im told his audience, recalling the deadly civil war that Sudan had seen after implementing the sharia in September 1983.

The price of adviocating sharia can be high. Gen. Jafa'ar Nimeiri, who is not a devout Muslim but a master of political maneuvers, took power in Sudan in 1969, backed by the military. An uprising threatened his power in 1976, prompting Nimeiri to build a coalition with Muslim cleric Hasan al Turabi of the Muslim Brotherhood.

But soon, sharia amputations and hangings contributed to the popular nonviolent overthrow of Nimeiri in 1985. As for Turabi, he became a very powerful person in Sudan between 1989 and 2001, when he was arrested by his own lieutenants.

Andreas Harsono, a longtime AR Correspondent, won the Nieman Fellowship on Journalism at Harvard University for international journalists in 1999-2000. He is based in Jakarta and helped translate a lecture by Abdullahi Ahmed An-Naim in the workshop.