Andreas Harsono
The Jakarta Post
In December 2021, I had the chance to talk with a bright 14-year-old girl named Maria Tunbonat, a fifth-grader in a state school in Tarakan, North Kalimantan. Her father, Ayub, also joined the video call as we spoke about her school and her hobbies.

Maria has been a fifth-grader for three years because her teachers refuse to let her move on to the next grade. The reason? Maria and her family are Jehovah’s Witnesses.

Jehovah’s Witnesses have specific views on key Christian theological issues that make them unpopular with some members of the Christian establishment in Indonesia and elsewhere in the world. Jehovah's Witnesses were banned in Indonesia between 1976 and 2001. In 2002, the Religious Affairs Ministry allowed them to register in Indonesia. 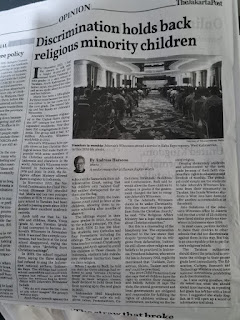 In November 2021, the National Commission for Child Protection revealed that Maria and her two younger brothers at SDN 51 state elementary school in Tarakan had been denied a passing grade since 2019 despite their excellent academic records.

Ayub told me that he, his wife and children, Maria, Yosua (grade 4), and Yonatan (grade 2) had converted to become Jehovah’s Witnesses in November 2018. It seemed like a simple conversion, but teachers at the local school disapproved, saying the children were “deviating from Christian teachings".

“We do not venerate the cross or any other images,” the group’s website says.

Ayub filed a lawsuit against the school at the Samarinda State Administrative Court, saying that his children only “saluted God” but neither disrespected the anthem nor the flag. In September 2020, the Indonesian court ruled in favor of the children, allowing them to resume schooling after months of absence.

The siblings stayed in their same grades in 2020. According to the school principal, FX Hasto Budi Santoso, SDN 51 has 158 Muslim students, two Catholics and four Protestants, including the siblings. The school has a part-time teacher to teach Christianity classes, and Ayub agreed to enroll his children in those classes. In Indonesia, students take mandatory religious instruction based on their religion.

When I spoke to Budi Santoso, he told me that the three siblings had refused to sing “certain Christian songs” and thus the school failed them in their religion classes. Budi Santoso decided to hold them back from moving up to the next grade in 2022.

Indonesia's 1965 blasphemy law “recognizes” only six religions: Islam, Protestantism, Catholicism, Hinduism, Buddhism and Confucianism. Budi said he would allow the three children to advance in grades if the government changed the law to recognize Jehovah’s Witnesses.

“If the Jehovah’s Witnesses claims to be under Christianity, then they must obey the guidelines from the Christian church,” he said. “The Religious Affairs Ministry has a legal explanation about Christian education.”

But this is a misreading of the blasphemy law. The explanation attached to the law states that despite “protecting” the six religions from defamation, Indonesia still allows other religions and beliefs to be practiced in Indonesia. President Sukarno, who wrote the law in January 1965, explicitly mentioned that “Judaism, Zoroastrian, Shinto, Taoism and others” could be practiced.

The 2014 Children Protection Law also says that all children have the right to practice their religions and beliefs. Article 21 says the state, the central government and local governments are obligated and responsible for fulfilling the rights of children without discrimination, including on the basis of religion.

Denying elementary students and advancement to the next grade because of their faith violates their rights to education and freedom of worship. The principal could simply ask the students to take Jehovah’s Witnesses lessons from their community in Tarakan, like Sunda Wiwitan students in West Java have done, or offer another accommodation at the school.

Ario Sulistiono of the Jehovah’s Witnesses office in Jakarta told me that a total of 22 children have faced similar problems elsewhere in Indonesia since 2016.  In most cases, parents decided to move their children to other schools that did not discriminate against them in this way. But this is an unacceptable price to pay for one’s religious beliefs. The Tarakan authorities should direct the principal to promote the siblings to their proper grade level immediately. The Education, Culture, Research and Technology Ministry should issue national instructions prohibiting such discrimination.

As I was saying goodbye, Maria asked me what she should spend time learning, as repeating her grade has left her with a lot of time. I suggested she study English, as it will open up a world of information and ideas. ***

Posted by andreasharsono at 8:00 AM