How to Make the Islamic World Less Radical 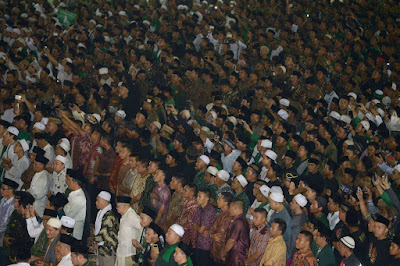 Recontextualize the teachings of Islam to address extremism—and to inspire reform.

Nearly a generation after 9/11, the world has made little progress in freeing itself from the threat of radical Islam. For every Osama bin Laden or Abu Bakr al-Baghdadi the U.S. eliminates, 100 radicals pop up.

Horrendous violence has engulfed much of the Islamic world, from the Central Asia through the Middle East to Africa. It also erupts periodically on the streets of London, Paris and New York. As of 2019, Britain’s domestic intelligence agency alone maintained watch lists comprising over 35,000 Islamist terror suspects believed to pose a threat to the U.K.

Why is the modern world plagued by Islamic extremism? Why do al Qaeda, Boko Haram and Islamic State display such savagery?

As I told the United Nations General Assembly recently, the doctrine, goals and strategy of these extremists can be traced to specific tenets of Islam as historically practiced. Portions of classical Islamic law mandate Islamic supremacy, encourage enmity toward non-Muslims, and require the establishment of a universal Islamic state, or caliphate. ISIS is not an aberration from history.

Until the formal abolition of the Ottoman caliphate in 1924, much of the Middle East was governed according to classical Islamic law, or fiqh, which is often conflated with Shariah. The operational assumptions of that caliphate and the classical corpus of Islamic jurisprudence by which it was governed have remained deeply embedded in Muslim societies. Even when not enshrined in statutory law, classical tenets retain considerable religious authority and social legitimacy, shaping the prevailing Muslim mind-set.

Classical Islamic orthodoxy stipulates death as the punishment for apostasy and makes the rights of non-Muslims contingent on Muslim sovereign’s will, offering few protections to non believers outside this highly discriminatory framework. Millions of devout Muslims, including many in non-Muslim nations, regard the full implementation of these tenets as central to their faith.

The problem is that these tenets, which form the core of Islamist ideology, are inimical to peaceful coexistence in a globalized, pluralistic world. But we can’t bomb an ideology out of existence. Nearly 1 in 4 people in the world is Muslim, and many Muslims—me included—are prepared to die for our faith.

The world isn’t going to banish Islam, but it can and must banish the scourge of Islamic extremism. This will require Muslims and non-Muslims to work together, drawing on peaceful aspects of Islamic teaching to encourage respect for religious pluralism and the fundamental dignity of every human being.

The most enduring way to address an extremist religious ideology is to recontextualize its teachings and reform it from within. Four centuries ago, Catholics and Protestants routinely killed each other; now they coexist. I believe the same type of change can occur within Islam in one or two generations. What’s needed is a credible alternative that is consistent with Islamic orthodoxy and developed and promulgated by those with religious and political authority in the Muslim world.

Indonesia’s Nahdlatul Ulama, the world’s largest independent Muslim organization, for which I serve as general secretary, is promoting such an alternative. Positioned firmly within the spiritual, intellectual and legal traditions of orthodox Sunni Islam, we recognize that much of the fiqh constitutes not the unchanging, spiritual essence of religion, known as thawabit, but rather its historically contingent expressions, or mutaghayyirat. These latter expressions of Islam may be changed.

Countless Indonesian Muslims have taken up this task of reform in recent decades. Starting in the 1980s, prominent heirs to this tradition led Nahdlatul Ulama officially to sanction collective ijtihad: the application of independent reason to renew temporal elements of fiqh and ensure that Islamic teaching and practice embody universal love and compassion, the primary message of Islam.

These efforts have borne fruit, and in 2019 the National Conference of Nahdlatul Ulama Religious Scholars adopted the Nusantara Manifesto—a theological framework for the renewal of Islamic orthodoxy—and abolished the legal category of “infidel” within Islamic law, so that non-Muslims may enjoy full equality as fellow citizens, rather than endure systemic discrimination and live at the sufferance of a Muslim ruler.

Our goal is not to remake the Islamic world in our image. Rather, we seek to establish a credible version of orthodox Islam toward which—with the appropriate global encouragement—other Muslim societies could choose to move. If that happens, a generation from now the Islamic world could be substantially less radical and violent.

The recontextualization of Islamic orthodoxy is crucial to the welfare of Muslims and non-Muslims alike. It is a prerequisite for any rational and humane solution to the multidimensional crisis that has plagued the Muslim world for more than a century. Leaders throughout the world can best contribute by examining the understanding of Islam that flourishes in Indonesia and urging other Muslim nations to consider a similar path.

Mr. Staquf is general secretary of the Nahdlatul Ulama Supreme Council and a co-founder of Humanitarian Islam.

Posted by andreasharsono at 7:00 PM