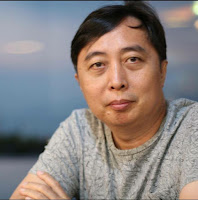 I remember him fondly today, and my love and thoughts are with his family.
Posted by andreasharsono at 7:24 PM