Internet and Freedom in Indonesia 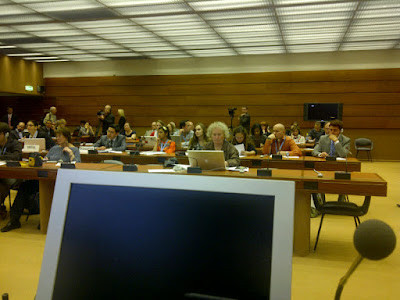 Audience at the conference on internet freedom at UN Human Rights Council on 9 June 2011.

I was among those angry reporters. We decided that it was time to organize ourselves and set up a new organization. It actually was illegal to establish a journalist union in Indonesia. Soeharto regime only sanctioned a single organization for each profession: farmer, teacher, laborer, journalist and others.

About a hundred journalists decided to move ahead. In August 1994, we declared the establishment of the Alliance of Independent Journalists. We soon published an underground magazine, having contributors sending stories from various parts of Java and some other islands. We also established a distribution network. Some members were arrested. Our printer was also jailed. The police targeted not only the reporters but also the printer.

In July 1996, President Soeharto cracked down an opposition party that was to challenge his rule. We thought that the stake was too high to only use the print media. We have to use the internet. But the internet was still in its infancy in Jakarta. We’re using a Bulletin Board System that used telephone connections to send and to receive email. It was particularly slow. It was also impossible to start a mailing list from Jakarta. We cooperated with the Maryland-based “Spacebar” mailing list to distribute the daily news stories.

A George Washington University media historian, Janet Steele, wrote in her book, Wars Within: The Story of Tempo, an Independent Magazine in Soeharto’s Indonesia, about this underground network. A review of her book says, “Blok M is an underground movement. It's like a ghost. Mysterious. Even among fellow activists, many do not know where it was. Blok M is a camouflage with a borrowed name of a shopping area in southern Jakarta.”

But it was growing rapidly. I remember one evening I have to sign the payments to 120 people. I did not realize that it was employing that many: full time and part time. Blok M ended up managing six wire services: politics, economy, analysis, East Timor, West Papua and Aceh. Our favorite was the seventh one: political jokes. The main victim was Soeharto indeed.

In 1998, when Sergei Brin and Larry Page were starting their new search engine, Google, in Palo Alto, I was involved in street battles in Jakarta. Jakarta was at the height of the Asian economic crisis. Soeharto was under pressures. His soldiers began kidnapping activists. Some were probably killed. Gordon Bishop, who started up the Joyo news network from New York, matched his working hour to Jakarta time: 12 hours difference. The dictator Soeharto, who had been ruling Indonesia since 1965, was finally forced to step down in May 1998.

Soeharto was gone. Freedom was in the air. Blok M people went to mainstream media.

But Indonesia entered a difficult reformasi period. In Borneo, more than 6,500 Madurese settlers were beheaded. In the Moluccas Islands, more than 25,000 people, Muslims and Christians, were killed in ugly communal violence. In Aceh, the freedom movement organized rallies against the Java-dominated Indonesia. East Timor had a UN-supervised referendum in 1999, ending up with 10,000 people killed. West Papua organized a non-violent protest but Jakarta repressed them with violence. On Java, some Islamists began to organize themselves, peacefully or violently.

Between 2003 and 2006, I travelled from Aceh, near Penang Island, to West Papua and East Timor, near Australia, learning about the nature of this post-colonial Indonesia. I read books. I studied human rights law. I began to understand the complexities of ethnic and religious relations in Indonesia. I travelled more often to the most difficult parts of Indonesia. And I write them on my blog.

Audryne Karma, the daughter of West Papua political prisoner, Filep Karma, argued correctly when she wrote, “Most Indonesians are freer under President Susilo Bambang Yudhoyono than they ever were under the ‘Guided Democracy’ of Sukarno or the ‘New Order’ of Suharto. But for many West Papuans like me, the old regime dies hard. Indonesia has yet to realize the promise of democracy and human rights for all of its citizens.”

In 2001, President Megawati Sukarnoputri promised West Papuans autonomy. But real autonomy has been denied. The government divided Papua into two provinces and more than 30 regencies. Worse, the government has systematically persecuted West Papuans for calling attention to this broken promise.

Another issue that gradually took my attention was the violent Islamists. They not only bombed Bali and Jakarta but also got involved in bloody clashes in places like Poso, Sulawesi Island, and the Moluccas Islands.

They also started their own internet operations, spreading intolerance and narrow-interpretation of Islam through their websites and social media. Their campaign is to establish an Islamic state in Indonesia. It’s not a new campaign. The debate between the secularists and the Islamists went back to the 1930s. But now they’re spreading their hate campaign in a scale that we have never seen.

According to the Indonesian communion of churches, there’re 430 attacks against Christian churches between 2004 and 2010. In June 2008, in response to wave of anti-Ahmadiyah violence, President Yudhoyono issued a decree, restricting the right of Ahmadiyah members to publicly practice their faith. The decree requires the Ahmadiyah to "stop spreading interpretations and activities that deviate from the principal teachings of Islam," including "spreading the belief that there is another prophet with his own teachings after Prophet Muhammad." The maximum penalty is five years jail term.

On Feb. 8, 2011, hours after an attack on members of the Ahmadiyah minority sect in a small village in western Java, I received a gruesome video. Some survivors managed to send the video to my place. In it, a mob of around 1,500 angry young men took turns beating three Ahmadiyah men to death while policemen looked on. Five others were wounded seriously.

I asked them to offer it to a Jakarta TV station. But the station decided to use the word “clashes” rather than “attack.” It also only broadcast the opening of the attack i.e. stone throwing. It was another censorship that most Jakarta televisions did. I decided to post the video on YouTube. It went viral, receiving 40,000 views in 24 hours. The video appeared on international news outlets including the Associated Press, the BBC, the Voice of America, CNN, Al Jazeera, Agence France Presse, and Reuters TV.

An Ahmadiyah monitoring team had recorded 56 cases of coercions against their members, mostly in western Java, due to the increased usage of internet to spread anti-Ahmadiyah hate speech.

The internet has developed so much. From BBS to Facebook and Twitter but the message remains the same. It is a site for both freedom and hate speech. ***

A statement made at The Human Voice of Freedom: The Internet and Human Rights, United Nation Human Rights Council, Geneva, 9 June 2011.
Posted by andreasharsono at 1:35 PM