Strip searches to be stopped at factory

Andreas Harsono
The Jakarta Post
JAKARTA (JP): The management of PT Duta Busana Danastri garment factory denied allegations that they removed the panties from their female employees to check whether the laborers were menstruating.
"We merely moved their blouses aside to assure that they were really having their periods," said vice director Elliani Sapta Dewi during a meeting at the Human Rights National Commission on Saturday.
But Dewi claimed that her subordinates had no other choice but to order workers wearing trousers to remove their pants.
Dewi said the investigations were conducted by female officials and that the management decided to do so after they found that a large number of their female employees in the garment factory declared themselves to be menstruating at the same time. 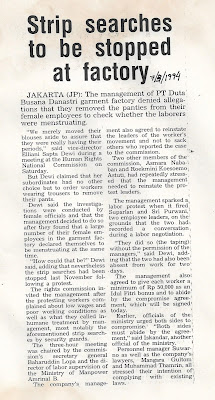 Posted by andreasharsono at 6:12 PM