If human rights violations of this scope and scale were taking place in Europe or the United States, one would expect Muslim-majority countries, including Indonesia, to have erupted in protest. But so far, there has been little to no response. Why? Because these abuses are taking place in China.

Since 2014, the Chinese government has imposed a harsh “Strike Hard Campaign” in Xinjiang, in the northwest region of China, to “eradicate the ideological viruses” of “Islamic extremism” from the Turkic Muslim population. This campaign dramatically escalates Beijing’s longstanding conflation of Uyghur and other Muslims’ distinct cultural, linguistic, and religious identity with political disloyalty or “separatism”. The Chinese government considers a wide variety of religious behaviour to be “extremist”—such as giving babies certain religious names such as Medina, or wearing a veil.

Over the past two years, rights activists, journalists and academics have revealed the suffering of Xinjiang’s Muslims, who are being forced to shed their ethnic and religious identity. They are being transformed, through mass arbitrary detention in “political education” camps and other measures, into a new people loyal only to the Chinese Communist Party.

Over the past two years, rights activists, journalists and academics have revealed the suffering of Xinjiang’s Muslims, who are being forced to shed their ethnic and religious identity.

Despite overwhelming evidence from satellite imagery, official documents, and policing apps that demonstrate severe repression in Xinjiang, the Chinese government claims that these are malicious and false allegations. It lamely contends that people there are “voluntarily” attending “training centres,” that they have now “graduated,” and that that everyone in Xinjiang enjoys religious freedom.

The Chinese government has made an apparent bid to win the support of governments, religious figures, and civil society groups in Muslim-majority nations, including Indonesia, for its policies in Xinjiang. The relationships Chinese authorities have cultivated over the years in Indonesia—including through donations and other financial support, according to a December Wall Street Journal report—have proved useful.

The Chinese government invited top clerics from Nahdlatul Ulama, the Muhammadiyah, the Indonesian Ulama Council, and some Islamic political parties to China and Xinjiang on guided tours of the camps, following which many of the invitees sang the praises of the Chinese government for its version of what is happening in Xinjiang. Many also criticised “American media” or “Western organisations” for mischaracterising problems there. In the meantime, the Indonesian government has largely stayed silent on Xinjiang, insisting it is a domestic matter for the Chinese authorities.

Nahdlatul Ulama and Muhammadiyah responded to the Wall Street Journal allegations that China manipulated them to ensure their silence by issuing a strongly worded statement on Xinjiang, calling on the Chinese government to “stop all violations of human rights especially against the Uyghur community, under whatever pretext.”

Last week, the Jakarta-based Narasi TV aired a ground-breaking investigative report on Xinjiang. Using satellite imagery, it showed how the Chinese government had manipulated those guided tours by removing barbed wires and other incriminating evidence prior to the visits, and by showing the Indonesian delegations only limited sections of Xinjiang’s political education camps.

Meanwhile, some Muslim and other nongovernmental groups, including the militant Islamic Defenders Front, expressed strong concerns. In December, there were protests against China’s treatment of Muslims outside China’s embassy in Jakarta. But many of these groups have also rallied against Indonesia’s religious minorities such as Christians and Ahmadiyya, so their actions seem more self-interested than principled.

Indonesia—which has played a positive role in the Rohingya refugee crisis—has shown its commitment to promoting rights elsewhere in the region. It should do no less for China’s Muslims.

The Indonesian government, along with the Nahdlatul Ulama and Muhammadiyah, should speak out against China’s treatment of Xinjiang’s Muslims and call for a fact-finding mission to the region, as the United Nations high commissioner for human rights has urged. They should demand information and the release of wrongfully detained Islamic scholars Hebibulla Tohti and Mohammed Salih Hajim, and Salih’s family members and associates. Some media reported Salih’s death in 2018, but a close family member says he is still alive. Such steps would be most effective if taken with other Muslim-majority countries, such as Malaysia, or members of the Organisation of Islamic Cooperation.

All governments dealing with China need to consider economic and security issues along with human rights concerns. But Indonesia—which has played a positive role in the Rohingya refugee crisis—has shown its commitment to promoting rights elsewhere in the region. It should do no less for China’s Muslims.
Posted by andreasharsono at 9:30 AM No comments: 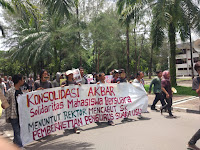 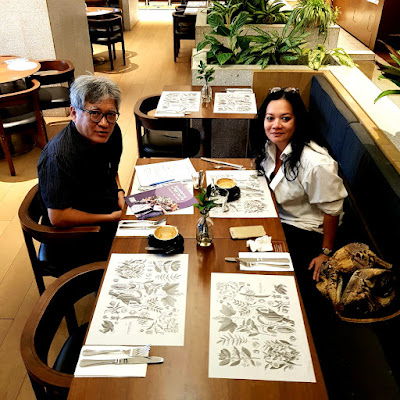