Ambon violence may have origins in Jakarta. 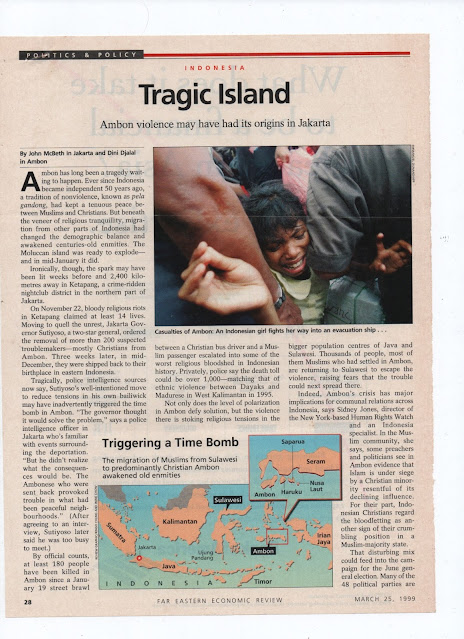 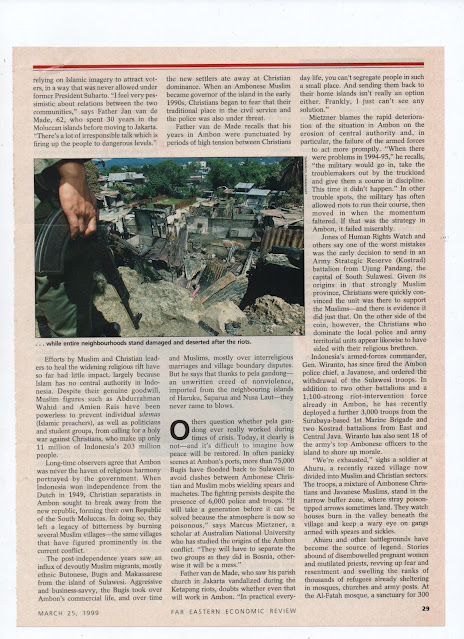 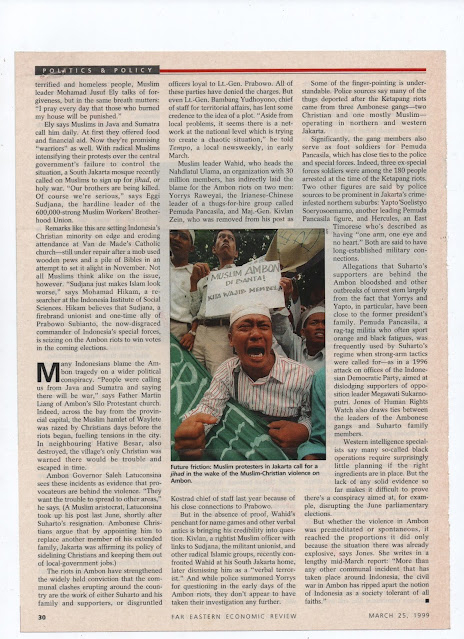 Posted by andreasharsono at 10:18 AM No comments:

A new deal for the poor

Collapsing national economies, natural disasters and political storms have dragged millions of people below the poverty line in the 1990s. Meanwhile, in many parts of the world, vast proportions of the population have been living in misery for years without any solutions yet in sight. Against such a backdrop, a new approach is emerging on ways to fight poverty. No longer are open markets, government or the poor seen separately as the key to eradicating poverty. Instead, a dominant view these days is that all three need to be brought together in a concerted attack. In short, a new deal is being offered to help the world’s poor. But is it enough? Our dossier looks at the prospects and problems in the three-pronged battle against poverty.

In a west Bucharest public housing estate that has seen better days, Liliana tries to prepare a casserole for dinner. “But without meat. Meat would be a luxury,” says the 41-year-old high school teacher, who was once middle class but now counts herself amongst Romania’s “new poor”, part of the fallout from the collapse of the state in the former Eastern bloc.

Half way around the world, in Jakarta, where luxury cars, designer labels and sky-high aspirations once symbolized an economic boom, a recent financial crisis has overnight deflated the economy and plunged huge swaths of Indonesian society into poverty. In the middle-class Bumi Serpong Damai housing complex, for example, children scavenge through the garbage looking for used bottles and old newspapers, while adults often take to more extreme means. “They are easily tempted to steal,” says a security guard at the complex.

Meanwhile, in the fishing village of Cabique on the shores of the Caribbean in southeastern Haiti, an entire community is sinking steadily deeper into poverty as a result of environmental mismanagement. Deforestation means that the pounding tropical rainstorms break up the earth and sweep into the sea tonnes of sole which choke the coral where the fish feed. As a result, the fish that once supplied a livelihood for this village have moved on. “It’s been 10 years now that I’ve done absolutely nothing because there’s nothing to do here,” says Victor, 35, a former soldier and a father of two children, who picks up spare cash working in local harvests.

Elsewhere, many are locked in a vicious circle of poverty that has existed for generations and seems likely to persist. In the village of Mimetala, 30 kms from Yaounde, capital of Cameroon, 80-year-old Marie Biloa has been unable to work since a car accident 15 years ago. There is no state aid for the unemployed, but she did receive a payout from a private insurance company. When her son-in-law stole that money and ran off, she was left without a means of support. Today Biloa dreams of going back into her former business of selling snacks at a street stall, but she lacks the $18 needed as a start-up investment. Neither can the rest of her family help. Biloa’s daughter has been abandoned by her husband. Biloa’s 20-year-old grandson is ill, with a sickness that has not yet been diagnosed because the family cannot afford to take him to hospital for tests. And so Biloa is forced to exist on handouts from villagers while a local charity gives her medical help free of charge.

Like a disease that has gone into remission but later strikes back with a vengeance, poverty has over recent years resurged in places that once seemed to be on the mend. As the Romanian, Indonesian and Haitian vignettes illustrate, the root causes range from a political vacuum left in the wake of formerly authoritarian regimes, to the collapse of financial markets that once seemed to be the surest remedy for poverty, to natural disaster and environmental mismanagement. The impact of these factors has been breathtaking: in the last two years alone, tens of millions of persons have been added to the lists of the world’s poor in Southeast Asia. In the Former Soviet Union and Eastern Europe, the number of poor has swelled by some 170 million during this decade.

Meanwhile, as in the case of Biloa, among vast stretches of humanity poverty lingers as it has for decades without any immediate hope of a cure.

But how can poverty be alleviated? In the 1980s, the so-called “Washington consensus”—an approach built around the trickle-down economics of multilateral lending institutions headquartered in the U.S. capital—saw the market as the saviour of the poor. By ensuring the efficient functioning of markets, economies would flourish and eventually wealth would make its way down to the impoverished. That at least was the theory. However, markets have proven to be fickle friends.

In our special focus on poverty, Rubens Recupero, Secretary-General of the UN Conference on Trade and Development, looks in greater detail at an emerging new consensus on tackling poverty (The crisis of the century). No one pretends to have all the answers, but there does seem to be general agreement that a multi-faceted approach is vital: markets, governments and poor people themselves need to work in concert to find solutions to poverty.

Our section on the market shows that trade and capital flows are still seen as vital ingredients in the fight against poverty but are not panaceas. Indeed, the financial crisis in Southeast Asia (A fickle friend) has demonstrated that faith in economic growth as a way out of poverty has led to neglect of safety net-building to help the poor during times of trouble.

Part two of this dossier demonstrates, by looking at the United States, the former Soviet bloc and Tunisia, under what circumstances the state can play a constructive role in the fight on poverty, and why in some cases the state has proven ineffective in finding solutions. The theme running through this section is that the state must play a vital part in the war on poverty, knowing when to intervene and when to stand aside.

Finally, in recent years analysts, politicians and non-government aid organizations have increasingly discovered that poor people may themselves possess analytic and other abilities that can be instrumental in grappling with poverty (pages 32 to 36). Making use of the skills and cultural attributes of the poor is proving to be much more important than was imagined a decade ago. But local cultures can also be an impediment to improvement.
Posted by andreasharsono at 9:18 AM 2 comments: