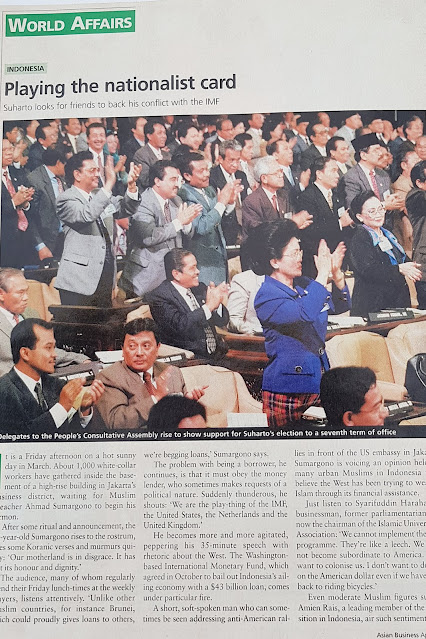 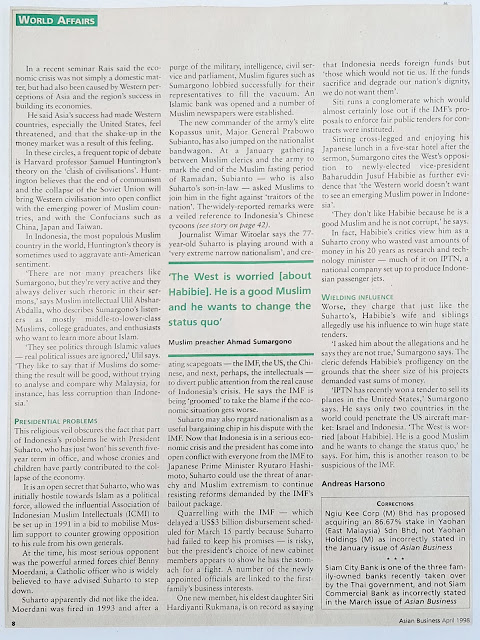 Posted by andreasharsono at 5:31 AM No comments:

Six dead in clash between fishermen

Indonesian authorities arrested 89 Thais for their part in the fracas during which the rivals rammed each other.

''Those are obviously foreign ships, judging from their Thai crew and the Thai characters printed on their sides, but the documents show they are Indonesian ships. We sense some forgeries,'' said Suprapto who was involved in the March 30 operation to arrest the seven vessels and the 89 Thais.

Witnesses and police officers said tension began to emerge in February when scores of Indonesian fishermen in the area, whose major port is Pangkalanbun, about 400 kilometres southwest of the Central Kalimantan capital of Palangka Raya, complained about Thai trawlers in their waters.

''Our fishermen are finding it hard to earn a living. They cannot compete with the Thais who use trawling nets for fishing,'' said one Indonesian fisherman.

Trawling, or ''pukat harimau'' in Bahasa Indonesia, involves one or two boats towing a very large net. Fish enter the net through the mouth and are forced to the other end which is made of a smaller mesh. The size of the mesh is controlled by law so that undersized fish can swim through unharmed.

But many fishermen in southeast Asia ignore the regulation. Trawling finally catches not only big fish but also smaller and younger ones. Environmentalists argue the practice has destroyed the sustainability of the salt water ecology. Indonesia, the largest archipelago in the world, is among a few countries which has banned trawling.

The Palangka Raya-based Pelita Pembangunan daily, which intensively covered the case, reported the Thai vessels were in fact first seen in June last year. They were apparently looking for tuna which are in abundance in the waters.

In a bid to turn away the foreign fishermen, Indonesian police, navy officers and the fishermen moved to the area on Feb 26, using some tow boats, and tried to arrest the Thais.

But the Thais, with their more powerful ships, reportedly resisted and even tried to run into the smaller Indonesian boats. ''We had to fire some warning shots,'' said Suprapto. A stray bullet killed one of the Thais, Captain Chuay Sayuth of the Mitra-16 ship.

The incident, instead of having a calming effect, increased the hostility between the Thais and the Indonesians.

The Thais moved away from the area for some time and then began striking back.

Three weeks later, the drama entered a new phase when an exhausted Indonesian fisherman told police some Thai fishermen had attacked and burned his traditional boat, severely beat five of his friends and threw them into the sea.

Syahminin, however, managed to stay afloat for four days before being rescued by another Indonesian boat. He was taken to hospital. The other five were believed to have drowned.

''Apparently the Thais wanted to take revenge,'' said Suprapto, adding the killing of the five Indonesians had prompted the Central Kalimantan police to seek assistance from the Jakarta police headquarters, which sent patrol ships to the Natuna islands off the Singapore coast and arrested seven Thai trawlers on March 30.

Indonesian regional expert Dewi Fortuna Anwar stressed the need for both governments to step up patrols and to solve the problem. ''We don't want our bilateral relations with Thailand to be damaged by this incident,'' she said.

Anwar said the Indonesian government should protect its waters and fishermen. She suggested Jakarta seize the Thai ships like the Australians do when Indonesian boats get caught in Australian waters.

None of the 89 Thais speak English or Bahasa Indonesia which makes investigation impossible. They are now being detained on their respective vessels anchored inside an Indonesian naval base in Kumai, about 12 km from Pangkalanbun.

Thailand's ambassador to Indonesia, Somphand Kokilanon, said on Monday he had not heard anything about the incident but for a modest account from his wife, who speaks Bahasa Indonesia, who saw a television news report of the incident.

''The embassy has not been involved yet but is prepared to cooperate with the Indonesian authorities,'' Somphand said.

He said in the past he had warned fishing authorities in Bangkok about the danger of fishing in alien waters and that they should go to Indonesia to discuss the problem with their Indonesian counterparts.

Suprapto said only the captains, the mechanics and the communications operators of the ships will be held, while the rest of the crews will be deported. The police are still waiting for immigration officials and a translator to question the Thais.
Posted by andreasharsono at 8:25 PM No comments: