A strain of intolerance is fueling the recent spate of blasphemy prosecutions.
By Andreas Harsono
The Diplomat
Donald Ignatius Suyanto, a chef living on the Hindu-majority island of Bali, on March 21, 2016 uploaded a video to YouTube in which he questioned the integrity of the Islamic shahada, or statement of faith. That prompted complaints from some Muslim bloggers and on July 27, 2017, police arrested Suyanto for blasphemy. He is currently behind bars awaiting trial.
In May 2017, Aking Saputra, a real estate executive in Karawang, West Java posted on Facebook his opinion that the majority of cadres of the Indonesian Communist Party, banned since 1966, had been Muslim clerics. A local Islamist group protested that those comments were blasphemous. Police arrested Saputra for blasphemy on June 9 and he is currently facing trial.
These are just two of the two dozen or so blasphemy prosecutions filed since President Joko “Jokowi” Widodo took office in October 2014, according to databases of the Setara Institute and the Southeast Asia Freedom of Expression Network, two Jakarta-based nongovernmental organizations. At least 10 of those prosecutions have produced convictions that have resulted in the imprisonment of 15 people. There have been zero acquittals. That compares to a total of 89 blasphemy prosecutions during the 2004-2014 administration of former President Susilo Bambang Yudhoyono and suggests that despite Jokowi’s rhetorical support for respecting human rights, he is content to allow abusive blasphemy prosecutions to continue unchecked. 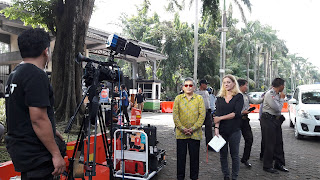 The threat of Indonesia’s blasphemy law is nothing new. The law, article 156a of the Indonesian criminal code, was passed in 1965 and punishes deviations from the central tenets of Indonesia’s six officially recognized religions with up to five years in prison. The blasphemy law has been used to prosecute and imprison members of religious minorities and traditional religions. Recent targets of the blasphemy law include three former leaders of the Gafatar religious community following the violent forced eviction of more than 7,000 members of the group from their farms on Kalimantan island last year, as well as former Jakarta Governor Basuki “Ahok” Purnama, who a court sentenced to a two-year prison term for blasphemy in May 2017 due to a reference he made to a Quranic verse in September 2016.
Not even the 22-year-old son of Jokowi, Kaesang Pangarep, has been immune to blasphemy accusations. On July 6, 2017, a resident of Bekasi, outside of Jakarta, filed a complaint of “blasphemous” content in a video that Kaesang posted on YouTube. Police declined to pursue charges because of “lack of evidence.” Despite the law’s abusive nature, Indonesia’s Ministry of Religious Affairs is seeking to reinforce and expand its scope through the so-called Religious Rights Protection bill, which parliament is likely to debate by the end of 2017. The government’s refusal to abolish the law, despite pressure from both the United Nations as well as the Indonesian Legal Aid Foundation raises troubling questions about the government’s willingness to respect its international human rights obligations.
But there is a new and equally sinister form of abuse of the right of freedom of expression linked to the same strain of intolerance fueling the recent spate of blasphemy prosecutions: vigilante-style persecution by militant Islamists of individuals who publicly express support for Ahok or concern about the blasphemy law. Statistics compiled by the Southeast Asia Freedom of Expression Network indicate that militant Islamists have targeted at least 55 people since September 2016 with abuse including online threats, verbal harassment and physical intimidation.
Their victims include Dr. Otto Rajasa In Balikpapan, East Kalimantan province. On November 4, 2016, Rajasa wrote a Facebook posting questioning the rationale of fellow Muslims who travelled from Balikpapan to Jakarta for a huge Friday prayer-cum-protest organized by anti-Ahok militant Islamists. That prompted a campaign of online and offline harassment from individuals who accused Rajasa of blasphemy. On December 21, 2016, the Indonesian Ulama Council, an umbrella of Muslim groups in Indonesia, issued a non-legally binding edict that Rajasa was guilty of blasphemy. Within weeks, that campaign prompted his employer to transfer Rajasa to a remote area in reprisal for his remarks. Classmates and a teacher of his 14-year-old son tormented the boy by calling his father a “blasphemer.” Police detained Rajasa on May 23, 2017 and on July 26, the Balikpapan court sentenced him to a two-year prison term for “spreading online hostility and hatred against Muslims.”
Fiera Lovita, a doctor in Solok, West Sumatra, fled her home with her family on May 29, 2017 after members of the thuggish militant group the Islamic Defenders Front (FPI) subjected her and her family to a relentless barrage of threats and insults in response to critical Facebook comments she posted about the group’s leader, Rizieq Syihab. That intimidation peaked on May 23 when FPI members confronted her at her workplace and demanded that she delete those postings and issue a written apology to Syihab. Rather than arrest the FPI members implicated in those abuses, local police “mediated a dialogue” between the FPI and Lovita. Lovita and her family have now relocated to Jakarta and have no plans to return to Solok due to personal safety concerns.
Until the Indonesian government abolishes the abusive blasphemy law and ensures that the police protect the rights of Indonesians rather than pander to the prejudices of those who deny those rights, blasphemy prosecutions and intolerant acts of harassment and intimidation by militant Islamists will continue.
Andreas Harsono is the senior researcher on Indonesia at Human Rights Watch.
Posted by andreasharsono at 10:18 AM